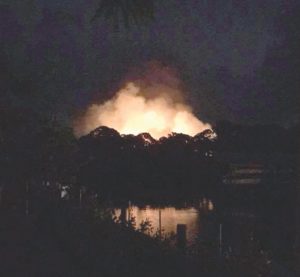 ■ On the evening of Tuesday, July 17 approximately five acres of woods on the mainland off Gasparilla Road burned, with the cause believed to be lightning. Englewood Area Fire Control District responded, as did the Division of Forestry. While the EFD was unable to access the area, the Division of Forestry brought their own firefighting tractor. There was also a small amount of rain that helped extinguish the fire. The blaze was controlled, and no buildings at Gasparilla Mobile Estates, the farmhouse on Gasparilla Road or Gasparilla Marina were damaged at all. While it was a small blaze, it could be seen from Marina Villages at the north end of the island, and one person said the glow could be seen by people when they walked out of The Temp.
The photo was taken by Jess Lyn from the back of Gasparilla Mobile Estates.

Newer PostRobert and all the other Johnsons
Older PostProfile Capt. Jack Sanzalone