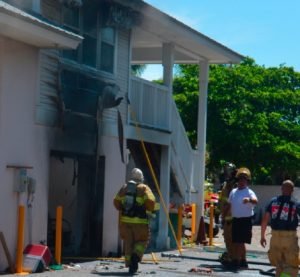 On Friday, Aug. 3 the Boca Grande Fire Department responded to a fire call at the Boca Bay maintenance shed in the 900 block of Gulf Boulevard. Approximately $15,000 of damage was done in the small blaze.

Firefighters received the call at 11:06 a.m., and arrived about six minutes later.

The fire apparently started when a lawn mower backfired upon ignition, causing a gas can next to the mower to catch fire. The gas can was then accidentally knocked over, causing the burning gasoline to spread onto the floor and an employee’s legs. He refused transport to the hospital.