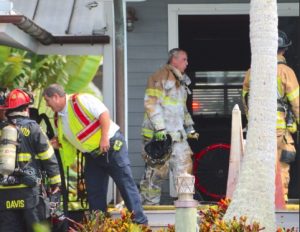 A home at the end of Damfino Street sustained approximately $500,000 worth of damage on Monday, July 23 as a fire broke out under the floor at the home and smoldered for several hours.

According to Boca Grande Fire Department reports, units responded to the home at 3:04 p.m. after it was reported that the smoke detectors were going off.

There was no one in the home at the time. A neighbor told firefighters he smelled smoke, but after checking the neighborhood he couldn’t find the source.

When firefighters arrived, they saw small puffs of smoke from the roof, but the person who called it in had not made entry into the building. According to Chief C.W. Blosser, the person did exactly the right thing by not entering the home.

“As soon as we got in the door, the fire gained intensity as it was being fed fresh oxygen,” he said. “It had been burning for awhile, and there was structural damage underneath the home. But everything went as it was supposed to go, and nobody got hurt.”

What could have been a potentially explosive situation turned out for the best, as the fire started under the floor in the kitchen of the home. When one firefighter stepped in, the floor gave way and he fell through onto a propane line, but it did not break. Had the line broken, and if there had still been any natural gas in it, it would have been ignited by the fire.

The firefighter, by the way, is fine, and the fire was fully extinguished by 4 p.m.

The fire is still being investigated by the fire marshall. Assisting Boca Grande Fire Department on the call were Charlotte County Fire Rescue, Englewood Fire and Lee County EMS.

Newer PostMote discloses truth about Boca Grande’s impact from blue-green algae: There is none
Older PostDon’t forget to get ready to vote!