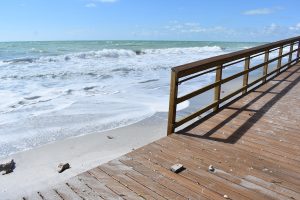 Residents and guests who were curious about the construction project at Fifth Street beach will be happy to learn that the repairs have been completed, and the ADA handicap-accessible ramp is now open to the public.

The new ramp includes an additional 40 feet of slope.

Lee County Government Communications Specialist Tim Engstrom said the ramp was in need of several repairs after strong storms in the summer of 2017 swept away the bottom of it shortly after it was installed. The County considered the length of the ramp when arranging for improvements.

Engstrom said the work was scheduled to be finished by the end of April, so the project did indeed meet those projections.

“We have two ADA beach wheelchairs available at the lighthouse, one of which is a floating wheelchair,” said Rick Argo, Gasparilla Island State Park manager.

The park also has a “Mobi Mat,” that accesses Boca Grande Pass beach, which has lightweight portable rollout nonslip matting that is temporarily or permanently placed on the ground to provide access on sand, grass or other unstable surfaces.

The Range Light State Park near Wheeler Street also has ADA access to the beach via a Mobi Mat.

Gasparilla Island State Park is located at 880 Belcher Road at the southern end of the island.

Newer PostAre you ready for John Storms the Reptile Man?
Older Post‘Mullet and Mangroves’ to be presented today at the Community Center