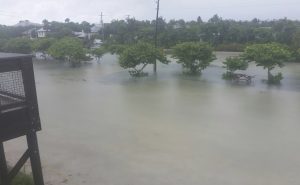 Depending on whom you talk to around the island, we received somewhere between 13 and 16 inches of rain over a five-day period last week, with the official reading from the Gasparilla Island Water Association being 13.13 inches.

Some homes along the water did have flood damage, and the Amory Chapel at the south end of the island sustained damage as well.

“We had about two inches of water in the chapel,” said Barrier Island Parks Society Executive Director Sharon McKenzie. “We haven’t tested all the computers yet and the desks are still drying out, but it looks like it could be as high as $3,500 in damage. We owe many thanks to Parks Manager Chad Lach and Rangers Anthony and Ruth, and to Chief CW Blosser and the wonderful Boca Grande Fire Department guys for all their help in getting the water out.”

Flooding on Belcher Road spilled into the state park, leaving many residents who had low-slung cars somewhat stranded.

The water didn’t recede until Wednesday, leaving questions as to how drainage could be improved at that spot. It is still being looked into.

Gasparilla Road at Grouper Hole was also a mess, and of course it was flooded near Boca Grande Resort at the north end. The Boca Grande Fire Department opened as an Emergency Operations Center during the flooding, but only to monitor the minor flooding situations on the island and to report back to Lee County.

The Island School was closed on Monday as well, as were all Lee County schools.

But the real flooding story obviously wasn’t in Boca Grande, it was in Texas. As of Wednesday it was 50+ inches of rain and counting for areas around Houston, and the devastation was unimaginable.

Some local men, including Landon Mac, Dave Abel and Nate Weissman, managed to coordinate a relief effort that included everything from air boats to dog food. They call themselves the Southern Sportsmen Disaster Fleet, and within just a couple of days’ time they had amassed 20 boats, two helicopters, pallets of food, drinks, clothes, pet supplies and other emergency supplies.

They had semi trucks and trailers, car trailers and other vehicles full of donations, and the first loads have already left enroute to Texas.

“This started as a few guys bringing their boats up, but it’s turned into something much bigger because of the overwhelming local support,” said local business owner and boat mechanic Dave Abel.

The group worked with Bobbi Sue Burton of Project Phoenix, a local nonprofit organization that helps families in need every day.

So far, only a small portion of their costs has been supplemented … the rest is being covered directly from their members’ pockets.

“The outpouring of support has really been amazing,” Nate Weissman said in a video on the group’s Facebook page.

“We have talked to HurricaneHarveyHelp.com and will be coordinating with them, as well as the Cajun Navy, to see where we will take all of this stuff. We may be gone a day, a week, a month … we don’t know.”

Blanche Vedette, co-owner of the Loose Caboose and founder of the Tank’s Legacy nonprofit animal rescue group, has already made a couple of trips to a distribution center north of Tampa with truckloads of pet supplies.

She plans to continue to gather as many supplies as she can, because help will soon be needed in West Texas and Louisiana as the storm holds together. She does need help transporting these items, though, as it is a long drive to make continously. You can reach her at (941) 421-2805.