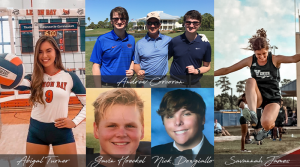 BY OLIVIA CAMERON – Prom dresses hang in closets, some with tags still attached. Hallways that were once filled with noise and bustle are still. Yearbooks will still be distributed, but the friends who used to fill pages with messages in hallways between classes and after school are sitting in their own homes, doing their schoolwork online. No Grad Bash, no awards nights or last band concerts, no traditional end-of-year festivities will be had to glorify the graduating class of 2020. Welcome to the world of quarantine and social distancing for the youth of our island, who had big plans to bask in the glory of senior revelry.

Many seniors on the island are currently wrapping up their courses and preparing for what’s next in store – for many that means college. As they finish their last year of school without friends by their side, these island kids reflect on what they’re missing.

However, for most of them it is a change they’ve accepted. Most feel the shutdown was an appropriate choice for officials to make in order to preserve Florida’s health and safety.

No senior knows the ramifications of what could happen better without social distancing methods than Savannah James. The senior at Pine View School and State College of Florida in Sarasota is the daughter of Kathy and Dr. Raymond James (Boca Grande Health Clinic). She was not only looking forward to an easier year of classes and more time to enjoy with friends, she was going to qualify for state in varsity track.

“I was excited to be a senior for the past couple of years, and my course load was made a little lighter to soak it all in,” she said. “But I’m not having too much of a tough time adjusting, and I’ve been able to focus on training and other hobbies, so some good has come of it,” she said.

Before the pandemic, Savannah was saving up by working as a busser at Scarpa’s Coastal, but will no longer be working over the summer due to the impact the virus has had on restaurants. However, she still has plans to study general business while minoring in Chinese language and culture at the University of Florida this fall, and she hopes to eventually study abroad in China.

Savannah looked to her parents for advice.

“I’ve asked my dad for medical opinions, and I have high hopes for living life again without taking things for granted,” she said.

School officials are waiting on state orders and taking advice from the Centers for Disease Control to move forward with graduation ceremonies, which could be pushed into the summer. Schools are looking at dates from as early as May 22 to as late as July 24 to hold commencement exercises.

Brian Corcoran, owner of the BRC Group on the island, and his wife Sigrid, also have a son who is a senior at Lemon Bay High School. Andrew Corcoran was not expecting the sudden change in his schooling method.

“I am capable of getting used to it,” he said. “I think it’s easy to complete assignments and connect with my teachers. But it has been difficult to get used to after being accustomed to classrooms.”

Andrew is sad to see the senior trip cancelled, but is thankful to stay in touch with friends through technology. He looks forward to his last day of online school on May 8, and plans to study political science at the University of Central Florida in the fall.

Abigail Turner is a senior at Lemon Bay High School who has had a big adjustment to the change. The daughter of JT Turner, who is a chef at Hudson’s Grocery, and of Kathleen, who is a real estate agent at Michael Saunders, she is an island girl through and through, having gone to The Island School for elementary school and grown up here since she was a baby. She is the senior class president, and had spent a lot of time planning activities for the end of the year.

“I just had to look at it from a different perspective and embrace it,” she explained, quite simply.

Abigail was very involved in sports – volleyball and basketball – until courses shifted to the internet.

“Online school is different, but I’ve kept myself pretty busy with the workload. At this point, I am just hoping we can still come together for graduation,” she said.

Lemon Bay High School Senior Gavin Hoeckel, son of Jennifer Cunningham, a bartender at The Temp, and island Charter Captain Shannon Hoeckel, (and the grandson of Carroll Swayze), found the online transition to be fairly easy.

Gavin saved up for a year before attending college to study horticulture, particularly marijuana strains and cultivation. After receiving a medical marijuana card because of a leg injury, he is interested in studying the plant’s medical usage so he can eventually help others with their pain.

Nick Dowgiallo, the son of Danny and Kim Dowgiallo, is a senior at Lemon Bay High School. Kim has worked at the Boca Bay Pass Club for 12 years, and Danny works at The Gasparilla Inn & Club.

Nick feels the end to their last school year was unfortunate.

“I was looking forward to Grad Bash at Universal and Project Graduation, but most of all I looked forward to just being with my friends before we graduated and went our separate ways,” said Nick. “Online schooling has been tolerable, I’m keeping up my grades, but I miss being stimulated in a classroom with my classmates and friends.”

Nick was a teacher’s assistant in the front office prior to the shutdown. He also enjoyed taking part in the Environmental Club and spent his spare time as an employee at Inn Adventures, operated by The Gasparilla Inn and Club prior to the Inn’s shutdown.

“I have a passion for art and creative writing, and can’t wait to further my education at Ringling College of Art and Design in the fall,” he said.

See next week’s Boca Beacon for more senior stories. If you know of a senior with island ties that we haven’t contacted, please email oliviac@bocabeacon.com.