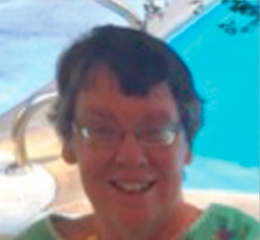 Terry lived most of her life as a resident at Lochland School in Geneva, N.Y., where she was considered an extraordinary presence and remarkable inspiration to all those whom she knew and met.

She worked at Cornell Experimental Station for several years, volunteered her time in various capacities at UH Geneva Medical Center and sang in the choir at First United Methodist Church in Geneva.

Terry was a creative and talented artist who also enjoyed fishing, boating, writing stories, collecting, gardening, music, dancing, swimming, caring for her cherished cats, Cappuccino and Ozzie, and spending time with her family in Cleveland, Ohio and Boca Grande.

Most notably, Terry was a major advocate for the March of Dimes, raising significant funds during her lifetime for this very important cause. She received the Finger Lakes Outstanding Helper of the Year trophy in 2015 for her work with March of Dimes. In 2008 and 2009, she was nominated for the prestigious ATHENA Geneva award, which recognizes female leaders in the community for their excellence, creativity and initiative in connection with their businesses and vocations, and in Terry’s case for her fundraising efforts for the March of Dimes.

Terry’s family wishes to acknowledge and give special thanks to the Lochland, Inc. organization and its many committed and devoted caregivers who made a meaningful difference in Terry’s life over the years.

In lieu of flowers, the family suggests that donations be made in memory of Terry to: Lochland, 1065 Lochland Rd., Geneva NY 14456.