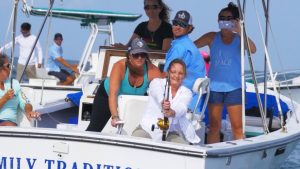 BY MARCY SHORTUSE – Never let it be said that William Woodroffe doesn’t know how to put a tarpon tournament together. When he heard that Ladies’ Day wasn’t going to be held this year, he couldn’t stand by and not give the ladies of the Pass their day of fishing … and so the Quarantine Queens Classic was born.

The tournament was held the Saturday before Mother’s Day, on May 9, in the afternoon. There were 26 in the field.

First fish of the tournament was caught on the Tracy Lynn, by angler Lauren Swanson. She was crowned the Quarantine Queen and received a custom shirt from Gasparilla Outfitters and a trophy.

Since you can only win one of the monetary prizes and Tracy Lynn ended up in second place overall, Spooked Again ( captained by Steve Ahlers) received the first release cash prize for the second release of the tournament. Anglers included Britt Allen, Liz Ahlers, Jill Lewis, Lindsey Gracie and Missy Harz. Jill Lewis was the angler on the fish.

In all, 51 fish were released in the three-hour event.

Just prior to lines being dropped in the water, William stopped to acknowledge our favorite sunflower tarpon queen, Nicole Coleman, who we lost not too long ago. Instead of a moment of silence there was hootin’, hollerin’ and yeet yeetin’ in her memory.

We can only hope she was watching over the action, with Isabelle Joiner at her side. Many anglers wore yellow in her honor.

For more photos, see this week’s printed copy of the Boca Beacon.

Newer PostTime they’ll never get back, Part III: What a strange way to end a leg of life’ s journey
Older Post‘Once upon a time’ came true for one island resident – Be careful, be conscious, be considerate … this virus isn’t over yet