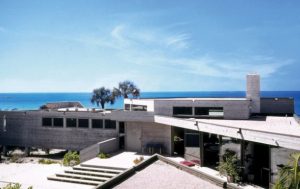 On Wednesday, Jan. 16 at 2 p.m. the noted architect will present “Tropical Architecture of Carl Abbott,” the second of this season’s lectures from the Boca Grande Historical Society. The presentation will take place in the auditorium of the Community Center, 131 First Street, with a brief reception to follow in the Woman’s Club Room.

Carl Abbott is a Fellow of the American Institute of Architects and the youngest member of the original Sarasota School of Architecture. He grew up in Florida, received a bachelor’s degree from the University of Florida and his master’s at Yale under the renowned architect and teacher Paul Rudolph. He worked in London and New York before forming his own practice in Sarasota in 1966.

Among his first designs was the Weld Beach House in Boca Grande.  This project brought him wide recognition in both Florida and nationally. The house recently received an AIA Florida/Caribbean Test of Time Award.  These awards are given for “designs of enduring significance.” Abbott also created a residence for the Leness family of Boca Grande, although the family had stipulated at the time that the project not be publicized.

Abbott is known for creating buildings “with humanistic qualities and that are closely tied to the land,” says Harold Bubil of the Sarasota Herald Tribune. His book is appropriately titled “Informed by the Land.” In the several introductions by his colleagues, Abbott’s architecture is described as “the geometry of plans, [in which] terraced extensions and landscape create seamless transitions from the public world outside to the private sanctums within.” (Architect Lord Norman Foster). “This open architecture is motivated by the horizons of infinity, and virtually no space in Abbott’s work is disengaged from a sense of what’s beyond it.” (Architectural Critic Michael Sorkin). “His buildings are sensitive to context, express a spare poetry without ever becoming austere, and have a unique beauty.” (Architect Lord Richard Rogers). Carl himself says, “Architecture can take you places you did not know existed – in a new way enabling you to experience your world – light, space and nature.”

Reflecting on his life, Abbott says, “The years have been filled with challenging projects, travel, teaching, working to preserve important architecture and to encourage quality modern architecture, continuing my exploration of the world of plants and raising peacocks.”

This program is free and open to all. Donations are appreciated.

For more information, call 964-1600, the Boca Grande History Center, or go to bocagrandehistoricalsociety.com.