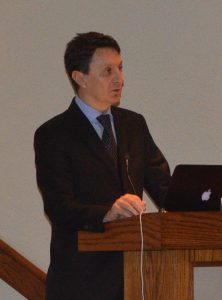 He discussed conditions that traditionally resulted in death and disability in a high proportion of patients.

“Over the last decade, physicians have developed a minimally invasive approach to treat these conditions. At present, there is evidence of the effectiveness and superiority of the endovascular approach over traditional surgery in hundreds of thousands of patients worldwide.”

Linfante is the medical director and endovascular neurosurgeon at Miami Cardiac and Vascular Institute Baptist Health South Florida in Coral Gables, FL. He is originally from Rome, Italy and has had extensive training with other experts in his field in Boston, MA. Possessing vast experience with ischemic strokes, he discussed revascularization by entering a vain through the groin and bypassing the heart and then going into the br

ain to install stent devices. “Time is not on our side and we have to act very fast. The longer it takes to get to the blocked artery, the worse the outcome could be,” Linfante said. He’s participated in five clinical trials that have proven reduction of death or disability in patients.

During his presentation, he showed examples of patients from age 14 to 92 who had experienced ruptured brain aneurysms. Each one was successfully treated and had no side effects from the surgery.

“Many of the cases we see were not treatable ten years ago. And the great part is all of the devices we use are designed and manufactured in the United States. We’re very advanced compared to other countries.”

Linfante said at Baptist Hospital in Miami, there are always two suites that sit vacant waiting for emergency patients.

“If we are able to treat a patient within 25 minutes of experiencing a stroke, it can greatly reverse the effects,” Linfante said.

One audience member asked about which hospitals in this area have the best neurosurgeons. “I believe Tampa is probably the best option in this area. We’re training more people all the time. Most specialists are in the bigger health centers,” Linfante said.

The Physicians Lecture Series is brought free of charge to the community and hosted by the Boca Grande Health Clinic. Guests were invited to meet Dr. Linfante and enjoy refreshments after the lecture in the Woman’s Club Room.