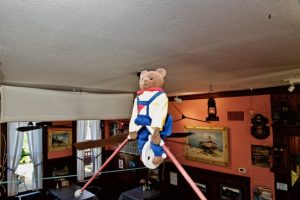 Many people who have lived on island or visited long enough will remember Ernest the Unicycling Bear who used to peddle furiously across the dining room at The Loose Caboose.

Several years ago I found a bear very similar to Ernest, but I couldn’t find the motor for him. We hung him up and would use a dowel rod to push up on the string or pull down to make him go, but he eventually fell and was broken. He wasn’t nearly as talented as the old bear. So I pretty much gave up having the bear in the dining room.

I was told that when the restaurant sold and changed hands, Ernest was purchased by a family that had young children, and he used to peddle across their room. Eventually they outgrew Ernest, and he was removed and stored in his box, waiting patiently to be found.

Several years passed and I always kept my eye out, but I never had success. At that time, Hurricane Irma was coming and I was reducing items at home to make it easier for prep. I was in Punta Gorda at the Salvation Army waiting to drop off my donations. Patricia and I were chatting, and I looked up at the vehicle unloading in front of me, and I saw the Ernest box! I was so excited!! I got out of my car and approached the woman dropping him off and asked the attendant if I could purchase him before they even unloaded.  She had to ask permission, and they said yes.  At that point the woman donating him said, “I have the motor too if you want it. I don’t even know if it works anymore.”

And so began his slow journey back to the island.  When I put him in my car and got home, I put him into the garage and didn’t really think about him again for a while.

After all, there was a hurricane coming.

Fast forward to September, 2019. I was going through items in my garage and came across the box again. The restaurant was closed, so I thought we could try to get him hung up even if he was only a stationary display. After all, the box was really old looking, and the chances of it working were slim in my opinion. I still didn’t realize who Ernest was at that time.

Tim, Jacques and Bradley all worked to try to get him balanced and running. The motor was noisy and needed a little oil, and his tightrope had to be strung tight enough but not too tight. It took about 2 weeks to get him running properly. I hand-sewed his clothes, because his pants kept catching in the pedals. After a few more adjustments, he started peddling smoothly back and forth across the dining room. We were all so excited to watch him go, and for some of us it brought back happy childhood memories.

As I gathered the boxes and instructions, I looked down at the box and froze. I couldn’t believe what I was just now seeing. The box had a shipping label to The Loose Caboose! It was the original bear! He was the same one I saw when I was young and my mother was alive to bring me.

Blanche Vedette is the co-owner of The Loose Caboose.