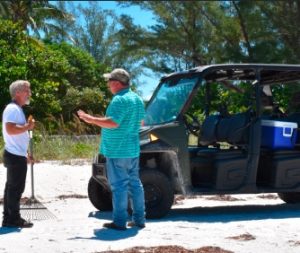 No matter what you may have heard, red tide is still rolling in with the waves on local beaches, and while conditions have improved there is still more than one reason to be very careful before getting in the water.

According to the National Oceanic and Atmospheric Administration, high concentrations of red tide are still being found in Sarasota County, Charlotte County and Lee County. However, the state parks on the island are flying and yellow and purple, which is a change from the double red flags that flew just two days ago. The purple flag signifies dangerous marine life, the yellow flag signifies a moderate risk from the surf, tide and/or currents. Park rangers said they did take the double red flags down because the water quality samples came in from Florida Healthy Beaches showed no advisory.

The visitbeaches.org site that gets its information from Mote Marine Laboratory & Aquarium showed as of August 7 there was dark water, some red drift algae and slight respiratory irritation.

While our beaches are looking better, between somewhat lower levels of K. brevis and Lee County beach clean-up crews working on Tuesday and Wednesday to clean up dead fish, beaches north of us are not doing near as well. Between Sarasota and Tampa many people are reporting mass fish kills and extremely high levels of red tide. In Venice, between Wednesday morning and Thursday morning, Aug. 8 and 9, eight dolphins were found dead and believed to have died due to red tide. Test results are still pending.

The Florida Department of Health is also reporting an increase in vibrio vulnificus in area counties, which is common in the hot summer months (VV is naturally occurring and is always in the water but, like red tide, comes closer to shore and thrives in very warm water). Lee County has the highest number of cases documented in 2018 – three – while Charlotte County has reported one and Sarasota County has reported one confirmed case and one death. In the state of Florida so far for this year there have been 19 cases reported so far, with three deaths.

People with weak immune systems or chronic illnesses that affect the immune system (such as diabetes), as well as people with open sores or cuts, should not be swimming in the Gulf during the hottest summer months. Make sure you are free from open wounds, and do not shave (your face, your legs, nowhere) prior to jumping in the Gulf water.

Local businesses and, in particular, the fishing industry has been dramatically affected since mid-June, when this particular bloom came onshore and caused massive fish kills. Many local real estate companies have had numerous cancellations, and local shops and restaurants are seeing nowhere near the business they normally would … even in August.