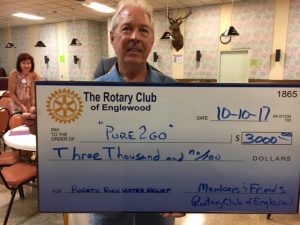 Visser is the vice president of sales at Water One, Inc. He’s lived in the Placida area for more than 25 years, and he helped develop Pure2Go water filters. The kits can easily fit into a standard carry-on bag. The filter can be used at any time when you feel the drinking water is questionable.

“Our initial effort started with the Rotary Club of Englewood and their pledge of $1,000,” Visser said. “I used the Pure2Go Facebook page and other advertising to suggest a call to action to get more donations.”

“As a result of this outreach we also connected with Chelsea Northrup, working with the Salvation Army as well as some other smaller groups interested in sending the water purifier kits to Puerto Rico,” Visser said. “Because of these efforts and the generous hearts of so many people, we have been able to ship more than 1,400 Pure2Go water purifier kits to Puerto Rico, and many of these have already been handed out to families that needed them. Chelsea did the majority of the fundraising for the Salvation Army using her YouTube followers.”

The Salvation Army has a working relationship with UPS, and all of the units were shipped for free to the main terminal in Puerto Rico.

“The staff at UPS were great – they took care of everything,” Visser said. “We just had to have the boxes ready for the truck to pick up, and they made it so easy.”

Visser said the priority was to get the filters to the most remote areas so that people who needed them the most were able to receive them.

The filters can produce up to seven gallons of purified water per hour. Each kit will provide water for a family of four for up to 3 months, and then the purification cartridges can be changed.

Northrup recently traveled to Puerto Rico to help distribute the filters and teach people how to use them.

“I met a family with several young kids, and they were all sick from drinking contaminated water,” Northrup said. “We showed the oldest son how to use it, and he happily followed us to neighbors’ houses to show others how to use the filters.”

All of the kits have instructions in English and Spanish, and Northrup made a video in Spanish on how to assemble them, with visual examples and bulleted instructions. The kits also have information on how to order more cartridges in the future.

“It’s fascinating to think that an idea that started at a small meeting in Englewood has helped more than 1,400 families in Puerto Rico,” Visser said. “And we’re not done yet. We’re still trying to spread the word and get more donations to send more kits.”

Pure2Go filters are unique, multi-functional, hand-held water purifiers that kill waterborne viruses and bacteria on contact and on demand while eliminating waterborne cysts. The product provides safe, good-tasting drinking water immediately, with no wait time. The heart of the purifier is “ViroBac,” Water One’s proprietary  purification system that has been proven effective after 28 years of testing by leading universities and independent laboratories.

“Aside from being available for disaster response, this product can be used by Florida residents or travelers to prepare for hurricane season or whenever they are concerned with water quality in emergency situations,” Visser said.

Newer PostDennis Whigham to address Garden Club regarding orchids
Older PostAre you ready to sing your heart out?