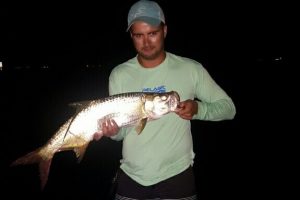 BY MARCY SHORTUSE – In the early morning hours of Sunday, June 19, Dylan Gonzalez texted a photo of a juvenile tarpon to his girlfriend, Linsey Peyton. It was the first ever tarpon he had caught on fly, and he was about as happy as he could be. Dylan lived to fish, and according to friends he was very conscientous in regards boating safety.

Just a short time after that text was sent, right around 4:20 a.m., Dylan died in a boating accident. According to one of Dylan’s friends he and Billy Pfannkuch, 29, of Port Charlotte, could hear something coming toward them in the darkness but couldn’t exactly ascertain where it was coming from. They tried to move out of the way but the next thing they knew another boat was literally on top of them.

Pfannkuch reportedly told his friends that the other boat was on plane in the no-wake zone in the Intracoastal Waterway near Eldred’s Marina and Placida Harbor, and may not have had running lights on.

Gonzalez and Pfannkuch were in a 19-foot Ranger flats boat. The boat that hit them, a 20-foot Lake and Bay, contained five people – boat operator Dalton M. Reas, 20, of Wauchula; Kristopher L. Johnson, 20, of Wauchula; Taylor N. Tompkin, 21, of Wauchula; and Rachel A. Coker, 21, of Myakka City. Coker sustained a serious injury to her leg.

Gonzales was transported to Blake Memorial Hospital in Bradenton but died there of his injuries. Pfannkuch was also injured quite seriously with injuries including broken collarbones and pelvis, but he is stable now.

After the accident Pfannkuch was able to climb back into what was left of the boat, call for help on the radio, call 911 and start chest compressions on Dylan.

According to the FWC, the Lake and Bay boat hit a channel marker, then ran into the boat containing Gonzalez and Pfannkuch.

An investigation is still being conducted by the FWC.

A GoFundMe account has been set up for Dylan’s family. You can find out more at gofundme.com/2a9xtn8. 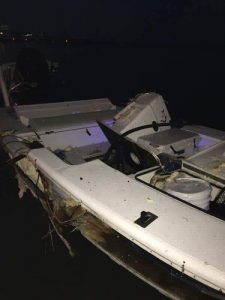 A GoFundMe account has also been set up for Pfannkuch’s family, as he will be out of work some time due to his injuries. That address is gofundme.com/2agm7uk.