BY MARCY SHORTUSE – On Monday, the first day of spring this year, a man passed away in his New York home, about 30 minutes outside of the city. His name was David Rockefeller, and when his final breath left his body, the end of a golden age went with it.

Do you ever think about a time, decades ago, when it was OK to believe in capitalism? To believe you could make millions with hard work, perseverance and a great business idea alone, even if you were some Joe on the street without an affirmation in your head as to how you would do it?

Do you remember a time when oil and steel companies weren’t the bad guys? When America’s greatness begat giant corporations that employed hundreds and thousands of Americans, and those Americans made this country the greatest and strongest nation on earth? Do you remember when the trickle-down theory actually kind of worked?

Obviously, Mr. Rockefeller had a bit of a hand up when it came to his future. His grandfather was considered to be the richest man on earth. His last name is synonymous with wealth. He was, as one writer from the Daily Mail aptly put it, “the last living connection to the extraordinary era of the Great Gatsby and the golden age of America’s great industrial dynasties.” 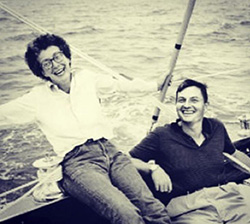 Peggy and David Rockefeller on their Hinckley Bermuda 40. According to The Hinckley Company, David Rockefeller very much admired the craftsmen who made these boats, and in 2008 when the company was suffering from the recession he ordered one of the boats to keep the people of Mt. Desert Island, Maine working and, as The Hinckley Company said on their web site, “in the spotlight.” PHOTO COURTESY OF HINCKLEY BOAT COMPANY

A lot of people don’t like to hear that kind of talk. Many are bitter about money, and about those who have it. It’s easy to be that way I suppose, but I never have been. My grandfather was a man who built a really nice life for his family, only to have his jewelry store and his home destroyed by a fire. His insurance man skipped town and left him high and dry, but he worked three and four jobs and built it right back up. In those days it was easier to do that, and he ended up with a comfortable retirement and nest egg that was then wiped out by nursing home costs. You make money, you lose money, you make it again … then you die.

If you have read anything about Mr. Rockefeller, you know the strict hand his grandfather and father had with money. His grandfather gave him and his siblings dimes when they were good. He had a strict allowance as a child and would make money raking leaves around the family estate. From what I have read, it appears his grandfather was actually a bit frustrated with all the money he had, and one of his favorite sayings was, “With great wealth comes great responsibility.”

You can look at that as an arrogant thing to say, but it’s true. There are causes I see every day I would love to donate to, but often I don’t have the money. When I do get money, I donate part of it. While it could be likened to squeezing blood out of a turnip in my case, I believe it is an obligation we all have as human beings to donate, to take care of each other, to spread the wealth around a bit. It is a truly a responsibility, and a sacrifice for many that is well worth it.

To say that about Mr. Rockefeller is an understatement. Figures from his recent obituaries run anywhere from $900 million to $2 billion that he donated to causes throughout his lifetime. Neil deGrasse Tyson did the math, and he tweeted that if Mr. Rockefeller donated $900 million, it was the equivalent to donating $24,000 for every day of his life … and he lived to be 101. I believe the truer donation figure was much more, so that’s a whole lot of money.

He took his grandfather’s words very seriously, but I believe he was a man of true heart either way. He had friends from all walks of life, and he varied his dinner companions as much as he could because he loved good conversation. He met with leaders from other countries that many would have shunned; he helped people that others would never have helped (there was that whole Iran hostage thing that happened – Google it if you don’t know what happened there); and he did all of this with no remorse. He did what he thought was right and kept moving forward.

Man, how I would love to see another golden age like the one when he was a young man. Every American family might have been just as dysfunctional as we are now, but they hid it nicely behind dinner parties and well-mannered children, by applying a new coat of lipstick or by donning a fresh suit. People went to church, they paid their bills, they kept their problems to themselves, and they cared about appearances. That’s one of the reasons I love Boca Grande and its people; so many of them still hold those traditions dear.

One of my very best friends was blessed to have Mr. Rockefeller in her life from the time she was born. Her father met him when they were serving together in Paris during World War II. They became great friends and worked together very closely after the war, their families vacationed together, and up until the day he passed my friend’s mother was at his side. When my friend used to live here, “DR” was part of our daily conversations about “Mom” because they traveled the world together. Mr. Rockefeller was passionate about travel, and from what I read, he always had been. He and Mom would travel comfortably, of course, on private planes and in private cars, staying at very nice places, but the fact he was still traveling at the ripe old age of 101 (and Mom at the age of 96) just tickled me to death. It was almost always during the winter months when he would spirit her away out of her home in Maine to far-off and exotic places, so she could get out of the cold and he could enjoy her company. Most of the time they were out-of-country, but sometimes they would come and stay at The Gasparilla Inn & Club for a few days. He loved Boca Grande very much, as does Mom.

I loved to hear about their itinerary and their exploits, I truly did. “Where are those crazy kids off to now?” I would think to myself. My friend was visiting here just prior to Mr. Rockefeller’s passing, and she showed me a picture of him and Mom in the Bahamas. They were dressed very casually, and I commented that it looked like they were just sitting around the campfire.

“They were,” my friend said.

How nice it must have been sometimes, to retire from that crazy banking life and just sit by the campfire. He didn’t just do that, of course, he was still taking meetings with heads of state and former presidents, but from what I heard of his daily life, he enjoyed his time thoroughly wherever he went. Not in an opulent, Las Vegas-y way, but in a simple, understated way that spoke of having had the finer things in life and often preferring the simple things in life instead. He didn’t have a squad of bodyguards, just a few staff members/friends who were part of his entourage. He enjoyed the heck out of his life – every day of it – and he enjoyed watching those around him enjoy life as well.

People can say what they want about the “five percenters” nowadays, and I’m not saying I will always disagree with it. But I will always have a soft spot in my heart for Mr. Rockefeller now, and for what his family did to make this country one of the best, brightest and boldest in the world.

Newer PostMaster’s Art and Wine Festival this weekend, Island Art Days next weekend
Older PostIt’s showtime! Join in the fun this weekend at the bike parade and fair