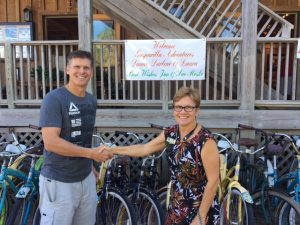 Zobrist will be running a business that will rent bikes, golf carts, kayaks and paddleboards.

“We’ll be offering guided water tours, or people can just rent kayaks and paddleboards to explore on their own,” he said. The company will offer outdoor equipment rentals and concierge service in delivering them, including golf carts and more. They will also offer bicycle repair services.

“We have 85 golf carts available for rent, which I believe is the largest fleet on the island,” Zobrist said. The real estate transaction closed on December 1, and Zobrist said the store has had a soft opening since then.

And he’s already quite familiar with Boca Grande. He most recently ran Gasparilla Adventures, a similar operation, for the past 12 years inside The Gasparilla Inn and Club. “We’re familiar with the community, and many people may recognize us from our time there,” he said.

Zobrist also runs similar adventure programs at the Greenbrier Hotel in West Virginia and the Broadmoor Hotel in Colorado Springs. He said the destinations attract clients similar to the visitors to Boca Grande.

Terry Seitz, the former owner of 333 Park Avenue, listed the property with Sue and Jim Reske of Parsley-Baldwin Realty about a year ago. He owned the building for nearly 25 years. “I decided to downsize some of my assets. It was time,” Seitz said.

He purchased the property from David and Donna Moore.

“It was originally built in 1950. When I bought it, it was just an apartment complex called Cabbage Court,” Seitz said.

Years ago he built the office complex building that currently houses a variety of businesses on the property and renovated the apartments to what is now a seven-unit lodge known as Boca Grande Village Inn.

“It will be a new challenge to operate a small inn as well as the business, but we’re excited about the opportunity,” Zobrist said.

Originally from California, Zobrist currently lives in West Virginia, but he said he plans to spend more time in Boca Grande due to the new business venture.

“There is currently one space in the building that’s not occupied. So something is coming, we just don’t know what yet,” Zobrist said.

The property sold for $4.22 million dollars.

“Duane and his company were wonderful to work with, and I’m sure he will be a great asset to the Boca Grande community. They’re experienced in providing the highest level of service for any outdoor needs,” said Sue Reske.

Zobrist plans to offer an open house in January to introduce his shop and staff to the community. The date has not yet been set, so check the Boca Beacon for future updates. The store is open from 8:30 a.m. to 5 p.m. seven days per week.

For more information, call 964-0711, which is the same number that Island Bike ‘n Beach formerly held.