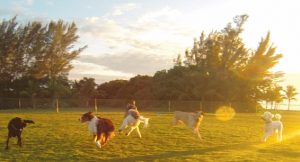 BY MARCY SHORTUSE – Rumor around the watering hole is that the “new” Boca Grande Dog Park is already open for business, fences be hanged. It’s a good feeling to know the tradition will be carrying on, stronger than ever, after the bittersweet closure of the old park on 7th Street. Some of the best communication to be had in Boca Grande was had at that dog park. Many friendships were forged, business deals were hatched and laughs were had. We’re blessed to have a new option, that’s for sure.

I want to take a moment, though, to ask all of you who use the old Wheeler Road ballfield, a.k.a. the new Boca Grande Dog Park, to be courteous of the residents who live on that road. One of the biggest differences between 7th Street and Wheeler Road is the fact that there are neighbors in very close proximity, with no giant privacy walls separating them from the canine and human action: You are essentially letting your dog run in someone’s backyard.

On 7th Street there were no private driveways to deal with, and the only home nearby was, in fact, behind a tall wall. Nowhere on 7th Street did golf cart or car parking for  the dog park hinder private parking or driveways, and the occasional wayward dog would head to the beach, not a private yard.

There are several things you and your dog can do to keep the peace between Wheeler residents and dog park enthusiasts, now that the location has changed.

Drive slowly down the street, especially if you’re in a vehicle other than a golf cart, to show respect for the people who live there.

Keep your dog leashed as much as possible. If it is a runner, remember that if your dog runs into another dog’s territory (even if your dog is merely being annoying and not vicious), it is your responsibility if there is a dog fight.

Keep your dog’s manners respectable. If your dog barks constantly on the cart or at the park, think about how you would feel with a never-ending yapfest in your backyard. Under no circumstances should you take your dog to the dog park if it has ever displayed aggressive tendancies toward people or other dogs. We have already had one very bad dog fight on the island this year, and more than one incident where people were injured on the Bike Path by overexuberant dogs jumping on them.

Be patient and courteous regarding parking. If a resident is pulling in or out of their driveway, give them a moment. They have just had to go from having a circus on their road just one day a week (on Fridays, from the farmer’s market traffic) to a circus every afternoon between 3 and 5 p.m. In the summer it won’t be an issue, I’m sure, but right now there are a lot of vehicles going up and down that road in an afternoon. What was once a quiet little road most days is now an active thoroughfare in the afternoons.

Jesse Lavender from Lee County, the same man who held the dog park meeting last year, came to the island recently and met with some of the Wheeler Road homeowners down at the ballfield. It wasn’t a public, advertised meeting, just a casual get-together for Jesse to answer some questions. According to the County the meeting was productive and the residents seemed satisfied, but if you were there and don’t feel that description is apt, please let me know. Either way, there was communication to be had, and communication is always good.

But if you weren’t there, and you don’t understand why it’s such a “big deal” to some of the neighbors, look at it like this: If you, or anyone you know, has ever complained about traffic on beach-access streets, keep in mind that the shoe may well be on the other foot if you are the one visiting the dog park.

The argument that the beach-access street residents have is that parking should be limited to decrease the number of people who come and litter the road and beach with everything from food wrappers to dirty diapers (and sometimes worse), and allow their children to roam in private back yards, and make a lot of noise …