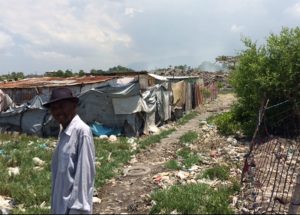 BY BEN SCOTT – On behalf of the Hope for Haitian Committee of Boca Grande, we thank all donors for their heartfelt gifts and making this a very successful year. We exceeded our goal of building 130 houses. The 2017 Haiti fundraiser was nothing short of a miraculous event. It has been so overwhelming that I felt impelled to write a story about it and share it with you.

A Story of Two Miraculous Events

Worn-out tents … tin huts … cardboard shacks … the acrid smell of rotting garbage of the city dump was daily life for 130 families living in this squalor. Angel Aloma, executive director of Food for the Poor, Cory and Lou Fusz, and my wife, Louise, and I were visiting this area for the first time in January 2015. This was our initial exposure to what was called the Alpha Village, located in a dump in Haiti. To say that we were stunned to witness such deplorable living conditions is an understatement. Our emotions could not be restrained and soon gave voice to our thoughts … Lou … “The worst conditions I’ve seen in Haiti … humanity literally living in the middle of the dump” … Cory added, “Unbelievable … to breathe the air and all the garbage that is here, intolerable” …Angel stated, “It’s one of the most shameful scenes I’ve witnessed in Haiti.” This was an experience that no one could ever imagine. No human being should ever have to live like this, but this is the reality of life for 130 Haitian families living in and around a dump.

Soon enough we were all back in the U.S. in the cleanliness, safety and security of our homes, but somehow, we could not shake the sights, the sounds, and the smells of the Alpha Village. That experience was too imbedded, and it occupied my thoughts for several months. There are 130 desperate families, and they need houses ASAP. We would have to raise $830,000 to make that happen. Our Lord was placing this heavy on my heart. Thinking out loud, but how can we possibly make this work? We have never raised more than $405,000 in one year … and even that required generosity driven by the 2010 earthquake, when 250,000 Haitians were killed and over a million left homeless. And for the next six years, our average annual fundraiser amounted to $235,000. Clearly, $830,000 is impossible. Right? The answers are not apparent. Time for prayer and reflection.

One day at Mass, the gospel reading was about Jesus and the loaves and fishes and how he fed 5,000 with a meager supply of fish and a few loaves of bread. The thought was all- consuming: If Jesus can do that, he can certainly build 130 houses in Haiti. He just needs the earthly tools. And my response was pure commitment: “Lord, I will take on this project, but if it is to be successful, I must give it to You to make it happen. Show me the way.”

The first port of call was Angel Aloma. Is there any way he could find some donors to do a matching gift? In less than two weeks he had lined up several donors to do a matching gift. Great! But my thoughts are still evolving. The matching gift is a huge help, but the remaining 65 homes are still a stretch. The Lord quietly led me back to my home town of Piqua, Ohio and to a friend, Sharon Semanie. I asked Sharon, a member of the local Rotary Club, if they would consider sponsoring a Haiti event. She and the Rotary Club agreed. Our expectations for this event were small, but God had other plans. Thanks to Our Lord, that “little” event raised enough money to build 15 houses. Step two, a solid foundation for the fall event, accomplished. Fifty homes to go!

Our Lord was making it happen, and He didn’t stop there. With His certain guidance came step three, the annual Boca Grande fundraising event. The planning was falling nicely into place. The committee was at work sending out letters to existing and prospective donors, making phone calls and encouraging anyone they would encounter to come to the event. And did they ever come! They came in record numbers. Step three, to deliver a broad base of support, accomplished.

At the event the Lord’s hand was again evident. An anonymous donor came forward and made another matching gift offer for that night only. After that announcement, it became clear that the room was charged and the chemistry was very positive. When the project presentation was over, people were rushing up to the podium with their pledge cards in hand. This was a first for any fundraising events. Without a doubt, Our Lord touched the heart of that donor to make the matching offer; only He knew the frenzy of support it would create.

After the event, Louise and I sat down and added up all the pledges. We couldn’t believe what had just happened. We we’re less than two houses away from making our goal; a huge success. Since the event we have exceeded our goal and are now able to relieve the pain and suffering of those 130 plus families living in that awful dump.

Let us never forget God’s great love for His people and that He will go to such lengths, as He did for us, for those who say yes and trust in Him. Step four, giving thanks and praise to God from whom all blessings flow!