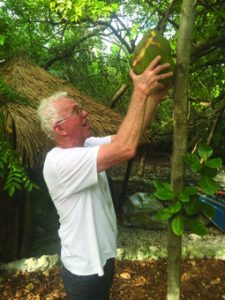 Then he patiently waited until the tree produced a fruit. About a year ago, one small fruit grew. A year later, it had developed into a 15-pound jackfruit.

“What’s so unique about this tree is that it can produce up to 100-pound fruits, Dean said. “I’m sure I’m the only person on the island who has grown one.”

The jackfruit, scientifically named Artocarpus heterophyllus, is believed to be indigenous to the rainforests of the Western Ghats of India. It spread early on to other parts of India, southeast Asia, the East Indies and ultimately the Philippines. It is often planted in central and eastern Africa and is fairly popular in Brazil and Surinam.

“It needs a subtropical climate to sustain itself and grow,” Dean said.

He purchased the fruit tree from a Pine Island grower.

“They have a spiny skin and edible bulbs of fruit with seeds inside them. I used to eat them in central America when I lived there,” Dean said.

Dean and his wife boil the fruit, and they said that once it’s cooked, it tastes like something comparable to yams. “I would say it tastes kind of like a combination of cantaloupes and sweet potatoes,” Dean said.

The fruit actually grows from the trunk of the tree. Once fully mature, the jackfruit tree can produce about 100 to 200 fruits in a year. The tree can grow as high as 30 meters. A small potted tree will take about five years to produce fruit. The flesh of the jackfruit is starchy and fibrous and is a source of dietary fiber. Jackfruits are also a nutritional goldmine: high in protein, potassium and vitamin B. It’s also a good source of antioxidant vitamin C. Some scientists say that the fruit helps eliminate cancer-causing chemicals and helps the body develop resistance against infectious agents. Jackfruit slices make a great addition to fruit salad. The fruit is also used in jam, jelly and chutney preparations. Jackfruit seeds are very rich in digestible starch, protein and minerals. They can be used in a variety of recipes; they generally are eaten either by roasting as a snack or added to stews or curries in place of lentils.

“Aside from the skin, we use the entire fruit. We put the seeds in our smoothies every day,” Dean said.