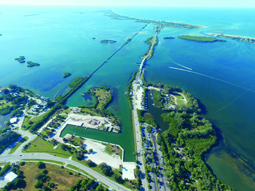 The Gasparilla Island Conservation and Improvement Association (GICIA) is pleased to report that the initial eco-restoration efforts at the GICIA Preserve at Placida are now complete.

The GICIA’s preliminary vision for the Preserve was to purchase the property to prevent impactful development at the gateway to Boca Grande. Once purchased, the idea was to transform the 30-acre site into a natural sanctuary for native wildlife, while also aiding in the protection of the marine life that forages in the shallows surrounding the site.

The GICIA board of directors felt it was also important that the site be managed in a way that commemorates and visually enhances the entrance to Gasparilla Island.

Once the demolition of the Mercabo Conference Center and its surrounding structures had been completed, the ecological restoration of the site began. In September, working with Rick Joyce, GICIA consultant and certified arborist, the restoration plans were finalized and the preparation for planting began.

“Unfortunately, though, before we were able to get our hands dirty, the torrential rains of Hurricane Hermine created washouts along the seawall, which became a priority issue for repair” reported Misty Nichols, GICIA’s executive director.

“In typical fashion, Rick Joyce found an upside to having to produce fill to backfill the seawall, and he proposed that fill be taken from onsite in a way that would allow for the creation of a shallow freshwater filter marsh. This saved GICIA from the expense of bringing fill into the site, and the marsh that was created immediately began to fill with fresh groundwater. “Within the first two weeks of the marsh’s creation, we found the area covered in tracks of wood stork, raccoon and bobcat just to name a few,” reported Nichols.

Once the installation of the temporary irrigation system was completed and both power and water had been restored to the property, the planting was able to begin. As the new year begins, nearly 4,000 native grasses, shrubs and trees have been planted at the GICIA Preserve at Placida.

Misty Nichols explained that “a buffer was planted around the northern perimeter of the site (along Placida Road), which was modeled after the GICIA Bike Path Master Landscape Plan. This provides consistency in how the GICIA properties are planted, while allowing for a simple and attractive landscape using native trees, shrubs and grasses.”

GICIA will continue to add diversity to the plantings to the Preserve at Placida in the years to come, but the open views of the water will continue to be maintained. Of course, none of this would have been possible without the help of the over 1,100 individuals who contributed, and GICIA is anxious to celebrate the successful completion of this project with everyone who made it possible.

The GICIA board is in the process of finalizing plans and anticipates that a celebration will be held in the spring. If you would like to be involved, it is still not too late to make a donation so that you are added to the GICIA Preserve at Placida donor list and receive an invitation to our special celebration. If you would like to make a donation or have questions, please contact the GICIA Office at (941) 964-2667.