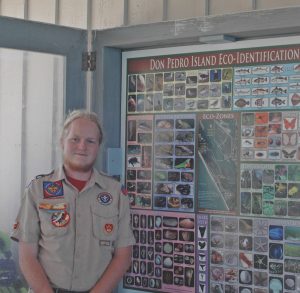 Summer Godwin was participating in a beach cleanup at Don Pedro Park with Park Ranger Richard Newman several years ago.

The two were discussing ideas on what Summer was going to propose for his Eagle Scout project, which is the highest and final rank a Boy Scout can earn.

Summer is in Boy Scout Troop 95 based in Port Charlotte. The two talked about the idea of creating informational signs to install at Don Pedro State Park – Island Base.

The proposal included making a sign with a large map of the park that would be installed at the boat dock entry area at the park. Summer would lead the project with help from a few of the younger scouts and leaders of the troop.

The idea was approved by the scout council and the next step was to secure funding.

“Luckily, I didn’t have to do any fundraising on my own,” Summer said. “I received donations from the Barrier Island Parks Society, Boca Beacon, Jimbo and Joy Wyman, Sharon McKenzie and some of my mom’s co-workers.”

Before the sign was completed and installed, Summer noticed there were two shadowboxes at the picnic pavilion that were rusty and in dire need of new paint. The boxes also had faded informational sheets inside which were barely legible. So he decided to create two more signs – one with a colorful chart that would help visitors identify the different species of animals and plant life habitat in and around the state park, and another one outlining a quick first aid station, like what to do if you are stung by a jellyfish, stingray and symptoms to watch out for heat related sickness.

With the help of his dad, Daniel, (art director at the Boca Beacon) and some fellow scouts, they sanded and painted the shadowboxes and installed the new laminated signs.

They also added a corkboard so the park rangers could leave notes for park patrons. The project was completed in March, 2017.

“It took us two days (two trips to the island on different dates) to get everything done,” Summer said. “There were about six of us who worked on it, overall.”

He officially earned the rank of Eagle Scout at a ceremony in Sarasota in May.

Summer has been a scout since he was in first grade. His parents encouraged him to give scouting a try and he liked it from the very first day. Over the years, he’s made many close friendships and plans to stick with it for a while longer and be a mentor for younger boys.

He is currently working at Imagine School in North Port cleaning and repairing student computers to get them ready for the fall. He’ll be attending Keiser University in Sarasota in August and plans to study cyber forensics.

“I think it will be an interesting career,” he said. “I’m trying to learn as much as I can right now at my job and get more familiar with different kinds of computers.”

To honor his mentor, Summer dedicated the Eagle Scout project in memory of Park Ranger Richard Newman who passed away from kidney problems before it was completed.