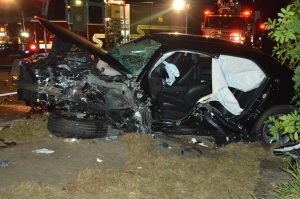 One of the drivers involved in an injury accident that occurred on Gasparilla Road last month has been charged with numerous DUI counts. The two-vehicle accident sent three to the hospital on Sunday, Feb. 12.

According to reports at approximately 8 p.m. on February 12 Lee County Sheriff’s deputies and the Boca Grande Fire Department responded to Gasparilla Road between 45th and 48th Streets where two vehicles made impact in a driver-to-driver collision when one of the vehicles crossed the center line. Both drivers had to be extricated from the vehicles. Two of the victims were transported to Lee Memorial Hospital by helicopter, while the third was taken to Englewood Community Hospital by ambulance.

The report alleges Burton’s blood alcohol level was checked at the hospital and found to be .246, which is well over the .08 limit. The driver of the other vehicle had serious femur injuries, as well as a crushed left foot.

Burton was issued citations for the charges while in the hospital, with a notice to appear in court at a later date.

Newer PostWe’re down to the wire now … which dog show poster is your favorite?
Older PostArt for a great cause to be found at Smart Studio