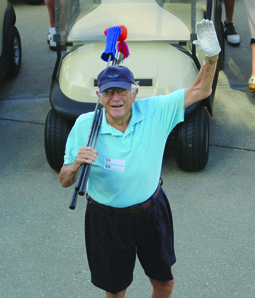 It would be impossible to determine how many lives any of us has changed in our time here on earth, but in the case of Dr. Henry “Hank” Wright, the list would go on and all the way up to heaven. He was “the island doctor” for so many years, and made an indelible mark on Gasparilla Island’s history. Now he has left us, and the void seems incomprehensible.

What will we do without Dr. Wright?

He was born on July 28, 1923 in Mobile, Alabama, and graduated from high school in 1940. He enrolled at Auburn University after high school, but World War II called him overseas for two years. When he returned home, he picked up where he left off and completed his premed studies at Springhill College in Mobile. Eventually he attended Duke University College of Medicine and completed his residency at Ochsner and did his fellowship at Tampa General Hospital.

How many babies were born healthy and happy because of Dr. Wright? Many people on the island have speculated on that very question. He was a man who made people comfortable from the moment they met him, which is a valuable skill for an Ob-Gyn to have. He was one of the most respected obstetricians in the Tampa Bay area prior to making his decision to move to Gasparilla Island … a decision we are all eternally grateful for.

He and his first wife (now deceased), Anne, first visited the island in 1954, just four years before the bridges were complete. They stayed  with long-time colleague Dr. Ingram at Journey’s End on 18th Street and did a lot of tarpon fishing. One day, when they were just getting ready to head back to the mainland via ferry, a storm set upon them and the skies split open. Between the waves, thunder and lightning, Anne exclaimed, “I will never set foot on that island again!”

Of course, that statement held no weight. Dr. Wright visited the island several more times after that, and in 1973 he was offered the directorship of the Boca Grande Health Clinic. It was an offer he couldn’t refuse, not so much because he wanted to leave Tampa but because he was an avid fisherman. Anne accepted the fact that  she would, indeed, have to return to Boca Grande, and he gave up his practice in Tampa and they moved here.

He was just 49 when he made Boca Grande his home. While he missed the pirate festival in Tampa (he was a member of Ye Mystic Krewe, after all), he very quickly came to love Gasparilla Island. As he once said, “Life has been so wonderful to me here that I rarely think back on what I gave up. I will never regret the decision to come to Boca Grande.”

For 17 years, Dr. Wright was the only doctor at the Clinic. It wasn’t uncommon to call Dr. Wright and hear a phone message saying, “I’ve gone fishing. You can reach me by radio on Channel 72.” Everyone knew if they needed him, he would come. He was the quintessential old-time doctor; one who made house calls, who listened to what his patients were saying, and who would give sage advice on anything from bunions to barbecue. Even if he hadn’t seen a patient in weeks or months, he would remember what their malady was and inquire as to how they were doing.

Of course, island living comes with quirks when you’re a doctor. One night he received a call from a distraught woman who claimed her husband must have had a stroke. He rushed over to the house, examined the patient lying on the ground, then gave his diagnosis.

Dr. Wright followed his predecessors and continued the fight for an island ambulance. During his time here it came, but prior to its procurement patients would be transported in a 1952 Buick station wagon, complete with a stretcher, oxygen and other medical equipment. In an incident that very well might have been the straw that broke the camel’s back, he was transporting a person who had passed away on the island to the medical examiner’s office in Fort Myers. At that time it cost 50 cents to cross the bridge system (and you paid both ways), and an additional 10 cents per passenger. The toll taker insisted he pay for his “passenger.”

Dr. Wright was a driving force in the Boca Grande Health Clinic that we know today. He and architect George Palermo were two of the creative minds behind the renovation, and he and Patty Hobbs were two of the primary fundraisers on the expansion of the Clinic that we go to today at 3rd Street and Park Avenue.

Dr. Wright started writing a little column called “Curbstone Consult” for the Boca Beacon in the early 2000s. His second wife, June, said it all started with the innocent questions people would ask when they were out and about. It was inevitable that someone would ask him about treatment for their arthritis, or what a disease one of their friends had been diagnosed with was really about. June said he would ask her the next day what that question was, and it then became fodder for the column.

Over his years as the island doctor, Dr. Wright treated a multitude of patients. Whether he was examining an island worker or Admiral Chester Nimitz, he did his job with the same amount of care and concern. As a matter of fact, former island resident Nimitz once said, “Hank is the island’s leading personality, its most popular, most admired and best beloved citizen.”

Anne passed away in the mid-90s, and after that he met June. They lived a snowbird lifestyle of sorts for many years, spending their winters in Boca Grande and their summers in New Hampshire. Dr. Wright continued to golf and fish until just a few short years prior to his death. It was a beautiful marriage and 20-year love affair, June said.

Dr. Wright had a fair amount of pain in the last years of his life, but it didn’t stop him from enjoying life to the fullest. He just kept plugging away at what made him happy.

Living in his beautiful home on Damficare, spending time with June and watching the boats pass by behind the house were some of those things that kept him enjoying life. While he couldn’t golf in the last few Hank Wright Golf Tournaments (which benefit the Health Clinic Foundation), he made sure his presence was known, and he loved to watch others take their turn on the greens. He was also able to get down to the 7th Street Park just a few weeks ago to watch the first-ever helicopter ball drop the Clinic held as a fundraiser, and he enjoyed it very much.

He had the love and respect of everyone in his life. The memory of his twinkling eyes and amazing sense of humor have his family and friends laughing more than crying, just days after his death. This is a legacy we can all aspire to, to become as immortal as Dr. Wright – a wonderful, caring friend, father, husband, and island doctor.

But the question still remains: What will we do without Dr. Wright?

Newer PostHowlin’ at a half moon, Capt. Waylon and his team take first in annual tournament
Older PostProfile: Alan Lenard