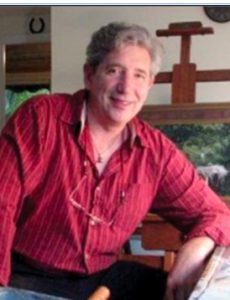 Del-Bourree Bach, a world-renowned master painter and a contemporary realist from Mystic, Conn., will give a lecture to the Boca Grande Camera Club on “An Artist’s View of Photography” at the Club’s scheduled meeting on February 6, at 10 am in the Houghton Room of the Boca Grande Community Center. He will demonstrate the similarities between photography and art, and will outline rules and techniques that can produce award-winning photographs. Camera Club members should bring their work so that Del can review it with an artist’s eye.

A long-time exhibitor at Hughes Gallery in Boca Grande, Del is known for paintings that are striking and almost tactile depictions of man and nature. His paintings are inspired by the sea and the life in and around it, as well as a wide range of subjects ranging from rural farms and western vistas to city sidewalks. He is always looking for new inspiration in the world around him. He says his paintings invite viewers to enter into the scene and to create their own stories.

Primarily a studio painter, he sketches and photographs in the field and occasionally enjoys plein-air painting. He works mainly in acrylic and sometimes in transparent watercolor. Basically self-taught, he is a keen observer. Starting out as an illustrator in New York, he regularly appeared in the New York Times, Wall Street Journal, National Review and numerous other publications. Among his illustration credits are two books by the late Isaac Asimov and work for the New York Philharmonic and Ringling Brothers Barnum and Bailey Circus. After deciding to devote his full time to painting, he pulled away from the more commercial side of art. Since then he has received over 200 awards in worldwide competition, and his paintings are included in private, corporate and museum collections in the U.S. and overseas, including the U.S. Embassy and U.S. Coast Guard art collections. His work has been shown in such publications as American Artist magazine, American Art Collector, International Artist, Watercolor Magic, and Fine Art Connoisseur, among others.

Del is a member of many professional arts organizations, including the American Society of Marine Artists, The Society of Animal Artists, Artists for Conservation, National Oil and Acrylic Painters Society (Master), American Artists Professional League (Fellow), and the International Society of Acrylic Painters. He is also active in the prestigious New York City Salmagundi Club.

Due to limitations of space, admission to this program is open only to members of the Boca Grande Camera Club. Membership, however, is open to anyone who is interested in photography. Dues are $35, and there are two meetings each month with speakers on a variety of topics, as well as other special events like the Photography as Art show In March. Contact Annie Vorel at annievorel@gmail.com for information on how to join, including an application form. If you want to learn more about the Club, go to their Facebook page or website: bocagrandecameraclub.smugmug.com.