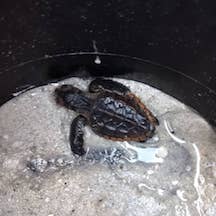 When one thinks of the great explorers of all time many names come to mind. Lewis & Clark. Marco Polo. Leif Erikson.

And then there is Crush, the wayward sea turtle.

Boca Grande Sea Turtle Association Board member Mel Csank reported her first turtle rescue of the season on the morning of Friday, July 5 … and it was an amazing tale of courage.

A nest of baby sea turtles hatched in the sand in front of the Boca Grande Beach Club sometime Thursday night or Friday morning, but became disoriented because of lights left on in a home nearby. The baby traveled through the club parking lot, across Gulf Boulevard, and under a home across the street. The hatchling chilled out in the pool (the odds were in Crush’s favor as it was a saltwater pool) all night until he was discovered by the kids staying in the home.

“I could not believe it … this one is a fighter,” Csank said. “It was a salt water pool, so maybe that helped him stay alive. But this is certainly the wildest rescue story I’ve ever heard.”

Patrollers named him Crush, after the sea turtle in the movie “Finding Nemo” … and, in part, because this turtle is “crushing it.”

Unfortunately, many of his siblings perished in the parking lot. It took a true survivor to make it that far without perishing, but this little guy still had some pep left when Csank picked him up.

Many of the staff at Gulf to Sotheby’s International Realtor as well as the Boca Beacon staff asked if the turtle could be tagged so people could follow his future endeavors (which are sure to be epic), but unfortunately he was already released.

The moral of the story? There are very few hatchlings who have the chutzpah that Crush has. Dozens of turtles could be saved every night if beachfront residents would just close their curtains and blinds or turn their lights off.

Newer PostIf you want to learn to sail on Lemon Bay, you’d better sign up now
Older PostThe truth about ‘flesh-eating’ bacteria in our waters … If you don’t feel safe going to the beach, read this