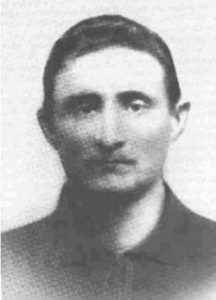 What is a cowpoke? Do they still exist? Cowpoke can simply be translated as a cowboy. Cowboys are American icons. I’m sure just about everyone has an image in their mind of a cowboy and probably thinks of Texas.

Florida is actually the place where it began. It was here where Ponce de Leon brought the first horses and Andalusian cattle in the 1520s. I think he underestimated the fighting power of the Calusa natives and decided that he’d better leave before they killed him.

Fast forward 300 years. As more and more people just like the Albrittons began to homestead land in Florida, they also got a taste for these wild cows. They began to hunt them. Cow hunter, they called them back them.

One of those cow hunters was a man named Morgan Bonaparte Mizell. His father was also named Morgan, and for some reason he was fascinated by Napoléon and made his son’s middle name Bonaparte.

Everybody called him Bone. Bone was an interesting man. He said what was on his mind, and it probably hurt him from time to time, but he had an interesting way of saying it.

From what I’ve read, he was always up to something and could probably make you laugh. One night Bone and some other cowpokes were playing poker in a private house near Arcadia. They were playing with chips. The sheriff got wind of this poker game and rode out to the house. “I’m gonna have to shut you boys down,” he said. “Ya’ll ain’t supposed to be gambling and ya’ll are coming with me back to town and spend the night in jail, and in the morning ya’ll will face the judge and pay $85.”

Bone said, “Sheriff, we aint gambling, these are chips.” The Sheriff looked at Bone and said, “Bone, who you think you’re talking to? Everybody knows chips is money.” They all rode back to town and spent the night in jail.

The next morning they all were in front of the judge, and one by one they paid the $85. Bone was the last to stand up and pay up. Bone laid out $85 worth of chips on the bench. Judge King said, “Bone, what’s this?”

Judge King said, “This is chips, this ain’t money.” Bone said, “Hang on now, that Sheriff said everybody knows chips is money last night, so this is how I’m gonna pay ya.”

Bone and the rest of the cowpokes walked out of court with their money.

Bone liked to drink and loved to raise cane in Tampa. Him and some pokes started riding toward Tampa, and Bone’s horse was worn out. He noticed a man in a pasture with a horse and a plow. Bone said, “I’m gonna get that horse.” One of the pokes said, “How? You ain’t got no money.” Bone said he’d figure something out, and he went over to the man and they began to talk. The other pokes were surprised when they saw Bone pull out a sheet of paper and a pencil, because they knew Bone couldn’t read or write. They watched him scratch something on it and hand it to the man, and Bone left with the horse.

One of the pokes said, ”Bone, what’d you give that man?”

Bone said, “I gave him a promise to pay later.”

“Well how’d you do that? You can’t read or write.”