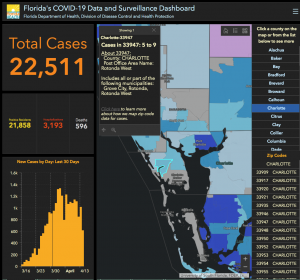 BY MARCY SHORTUSE – While cases numbering, on average, 350 a day are still being reported to the Florida Department of Health, Governor Ron DeSantis is talking about opening schools and finding small ways to re-open the economy. It may seem like a rash move to some, but most business owners don’t know how much longer they can hold out without income. Meanwhile, school administrators are facing complaints from parents and teachers about inadequate and frustrating “distance learning” procedures.

It is definitely not the time to want to be a politician, as they are making delicate decisions that will greatly impact life in this state as we know it … no matter what the decision is.

When projections for COVID-19’s curve first started to be publicized, our projected “peak” date was in early May. Somewhere along the line last week that date was changed to April 26, then to April 21. Just this week researchers announced it would more than likely be May 3, with May 6 predicted to be the “deadliest” day.

To give you an overall perspective of each day since two presumptive COVID-19 cases were found in the state, we have composed a timeline.

Keep in mind, these case numbers are approximately .1 percent of the state’s population (just including residents, not visitors), which means only that percentage of people have been tested. A large majority of those people are on the East Coast. To be tested on this side of the state is rare.

There are still no confirmed cases in the 33921 zip code. As of Wednesday, in Charlotte County there were 124 total cases, five deaths and 21 hospitalized. Their ages ranged from 16 to 96, with a median age of 68. Of that number 58 percent were female, 40 percent were male.

Please let us know how you feel about the state re-opening for business on May 1 by taking our poll at bocabeacon.com. There is also a link on our Facebook page.