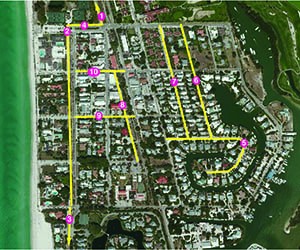 BY SUE ERWIN – A Lee County resurfacing roadway improvement project will include improving roadways in Boca Grande starting this summer.

Lee County DOT anticipates the work will begin this summer and be completed within two to three months. The project is expected to go out for bids in May and then will be slated for Lee Board of County Commissioner approval before any work begins, Clayton added.

The estimated total to be resurfaced is approximately 6.5 miles.

See the attached graphic for the start and end points of the repaving for each of the roads.