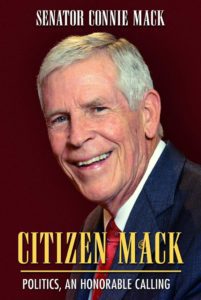 STAFF REPORT – On Wednesday, Jan. 27 at 4:30 p.m. Friends of the Boca Grande Community Center will host a livestream event, “Connie Mack, former Republican U.S. Senator.” The presentation is subject to opening guidelines, and an in-person event may be added. Stay tuned for announcements.

Connie Mack III has had many titles throughout his life and career. A former U.S. Senator, a crusader against cancer and a dedicated father, but his title of choice remains: citizen. His life in politics began as a member of the House of Representatives from Florida through the ‘80s and was elected to the U.S. Senate through the duration of the ‘90s. When Mack left the Senate, he returned to the private sector and started a new career: serving on two bio-tech firm boards (Genzyme Corp. and Exact Sciences Corp.), along with M2Gen, a health informatics solutions company; and, he became chairman of the H.L. Moffitt Cancer Center & Research Institute. Threaded with candid stories, Mack’s memoir offers an inside look into the political culture and climate of the nation as it closed out the twentieth century and progressed into the twenty-first.

A thorough and honest account of what the world of Washington looks like, from a man whom George W. Bush wanted as his running mate; who took part in the debate over one of the country’s most contentious Supreme Court justice appointments; whose voice mattered when it came to deciding whether to remove President Bill Clinton from office, following his impeachment by the House. All this and more Mack recounts as a once-politician, now-citizen: Citizen Mack.

Call the Friends office at 964-0827 for more information.