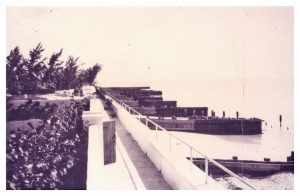 BY MARCY SHORTUSE- A verdict has been reac
hed in the case of Doug and Carolyn Comrie, residents at the juncture of 3rd Street and The Promenade, in the 20th Judicial Circuit Court representing Lee County. The final ruling is that the Comrie’s have won their right to “quiet title” to the property.

Quiet title is a term that means they have jurisdiction over the land that borders their property, and this ruling will “quiet” disputes to that in the future.

The Comries claimed that they did not know the land was not included in their 2013 purchase of the residence, because the previous owners had “sole use and control” of the path.

The reason this was an easy win for the Comries is simple: There was no one to contest it. Lee County has expressed puzzlement regarding ownership of The Promenade for quite some time, and never pursued that knowledge.

With the victory that comes with winning this suit, the Comries can now use that land for their own, and can fence it or landscape it as they please.

The ruling did not come as a surprise, as very little interest was shown by the community (short of a few) in preserving the old walkway that was deeded from one now-dissolved company – the Boca Grande Corporation – to another now-dissolved company – Boca Grande Associates, Inc. – in the late 1920s. Because both of those companies no longer exist, the land was, by forfeiture, titled to the people of Boca Grande. As time went on it appeared that Lee County had taken over trusteeship.

While it appeared that a majority of the property owners along The Promenade, like Ffolliott, were content with leaving the historic path alone, there were a few who were not. The Comries were in the latter category, and not only blocked the path that ran along their property, their attorney, Charles Jones of Jones & Haber of Cape Coral, also sent the Boca Beacon a disclosure and preservation of documentation demand through the courts … via fax. However, they never followed up with the demand.

In January of this year the rocks were spray painted orange, and the Comries targeted local historian and generational Boca Grande resident Robert Johnson in a lawsuit regarding his letters to the editor in the Boca Beacon, and for “trespass to chattels.” 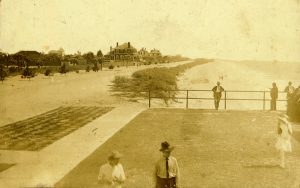 In the civil action it was explained that, subsequent to their purchase of the home on 3rd Street, they had evidence that people trespassed on the property and left golf carts, trash and debris, causing damage. The Comries stated in the civil action that the reason they placed large stones at each end of their property was to restrict golf cart access.

The civil action also stated, “In response to the Comries protecting their property from damage, on or about November 15, Johnson allegedly made defaming comments about Comrie placing the stones on their property to an editor (Marcy Shortuse) at the Boca Beacon,” and that Johnson alleged that “people had been trying to block it off for at least 50 years.”

The civil action also alleged that not only did Johnson spray paint the rocks orange, but that his comments were “clearly intended to ridicule and cause damage to the Comries.”

No public evidence was produced that Johnson did, in fact, commit the vandalism.

While the Comries did, eventually, move the large rocks they had placed in the path (with just enough room to walk through) in an act of good faith, now it is unknown what their next plan of action will be since they have won their case. They have not responded to this newspaper’s attempt at communication.

Meanwhile, the civil action filed against Johnson by the Comries has been voluntarily dismissed with prejudice.

Newer PostPROFILE: Donna Larson
Older PostBoca Grande Preschool is back to the books after virus shutdown