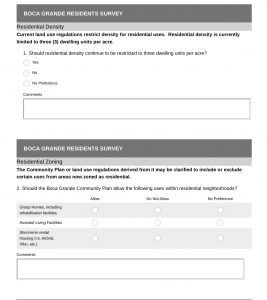 BY MARCY SHORTUSE – The survey being taken by the Boca Grande Community Planning Association continues on, and so far responses have been numerous.

As of Tuesday morning they had received 172 responses from 279 surveys delivered. There is a 94 percent completion rate for those taking the survey, which means they are getting good data from respondents.

The time required for survey completion is brief, averaging under eight minutes.

Island residents (permanent or seasonal), business owners, and employees who work on Gasparilla Island may request a survey by sending an email to bocagrandecpa@gmail.com. There has been no deadline set for closing the survey to participants, but the panel would encourage everyone with an interest in our island community to make their views known by requesting and completing the survey as soon as possible.

“We won’t stop working during the quarantine – for a lot of reasons,” said Community Planning Panel Chairman Peter Solmssen. “First, we expect the schedule won’t change. Boca Grande’s community plan will be reviewed in 2021 and we want to have a proposal ready before then. It will be a lot of work. Second, everyone suddenly has a lot of time! On that note, we hope our fellow residents will use some of their time in isolation to take, or to finish, the survey which, we will send to anyone who sends an email to bocagrandecpa@gmail.com.

Of the 280 who have asked for a survey, 70 percent have finished or partially finished it. Slightly more than half of those who have responded are Florida residents. The rest are seasonal or non-residents. About 30 percent work or volunteer on island.

Newer PostHome is where the health is: Governor issues Executive Order 2020-91 ‘Safer at Home’
Older PostUpdated Clinic policies spurred by COVID-19 concerns for those at risk