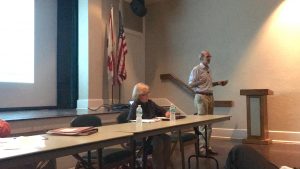 BY MARCY SHORTUSE – A name that hasn’t hit the headlines in a very, very long time is back, as the Boca Grande Community Planning Association met again on Monday, Jan. 27.

Chairman Peter Solmssen began the meeting by introducing the board members, which currently include Ted Hoopes, Lynne Seibert, Andy Krusen and Solmssen. Advisors are Matt Uhle and Pam Houck.

Hoopes and Seibert are carryovers from the 2004 Boca Grande Community Planning Panel from years ago. That panel sunsetted after their community plan was accepted by Lee County and incorporated into the county’s development code.

Solmssen explained to the audience that the community plan for the Lee County portion of Gasparilla Island that was submitted years ago is “a document full of things Lee County said they would do for the island.” He added that the original plan is very conceptual, and not specific.

“That is part of our job now,” he said. “we need to fine tune the specifics, and to see exactly what Lee County has done that they said they would do.”

Solmssen said the impetus for the board to re-assemble at this time is due to the fact that Lee County is moving ahead with their community plan changes, and they are expected to make changes to all community plans in 2021 … whether the communities are on board or not.

Hoopes explained how this works.

“Every seven years Lee County looks at unincorporated areas and has meetings to see what they are interested in,” he explained. “In 2004 it was their turn to come to Boca Grande. That day the meeting room was packed. They were astounded, because usually no one comes to those meetings. The county went to the Gasparilla Island Conservation and Improvement Association and told them there was a lot of interest in community issues here, and that they should develop a community plan.”

That was how the first group was formed.

“In the mean time,” Solmssen said, “they (Lee County) have already started. In 2018 they began to go through all the community plans and amending them.”

Solmssen said the panel hopes to provide more consistency in the language in the Lee County/Gasparilla Island plan, remove vague and unnecessary language, add more reference to the Gasparilla Island Conservation District Act and to better define the unique circumstances that make up the Boca Grande Historic District.

All of this, and more, will be part of a proposed zoning overlay district, which can address inconsistencies with current zoning districts, the comprehensive plan, and the GICDA.

Solmssen said they will be taking recommendations and suggestions from members of the community, and eventually they will be doing a survey. They have also engaged an attorney, a local fellow named Michael Haymans.

The auditorium was filled with island residents who had questions. In all, more than 15 residents stood and asked questions that related to everything from encroachment permits to drainage.

The meeting wrapped up relatively quickly, with Solmssen asking everyone if they would email the group to be put on the mailing list for updates and future meeting times and dates.

The link to Lee County to get the community plan is leegov.com/dcd/planning/leeplan.