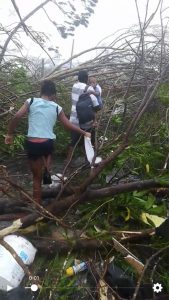 UPDATE TO THIS STORY: As of Thursday evening, Dencina’s family had been relocated to Nassau and even more family members had been located alive and well.

My Sis and family finally left Abaco this evening, and are totally safe tonight. They are finally on the island of Nassau! My two brother’s and their families, that are on Freeport is also well and trying to recover. I just want to say thanks to the Almighty God for what he has done. Lord you deserve all the praise, and all the honor for you are worthy to be praise. Thank you Lord for keeping my family in the midst of that killer storm.

Thanks to everyone who called,or reach out with assistance in every which way, to express thier love and support and to join hearts, with my family in prayer every step of the way. We the family and especially my sister and brother and their families can’t thank you all enough …
I also had many cousins that has now been found. Words cannot express how my bloodline feels tonight. The sense of relief that is now upon us. For the past few nights, I haven’t been sleeping just up praying and trusting God to see each everyone through this disaster.

So many families are still in distress, and is now homeless due to Dorian, so please world dont stop praying. Abaco and Freeport needs your continued support.

Dencina Ihlanberg, the concierge at The Gasparilla Inn & Club, took a phone call in the past week that no one wants to get. It was her sister, Ethlyn Seymour, calling from Murphy Town on Abaco in the Bahamas.

“Come get us, please,” Ethlyn said over the phone. “It’s been five days, and we just ate the last of our food last night. We lost everything.”

Hurricane Dorian may have missed us, but it’s hard to celebrate that fact when our hearts are with those just a few hours to the east of us. Dencina was able to provide the Boca Beacon with some real-life reports of what is going on in some of the hardest-hit areas of the Bahamas.

Ethlyn described the storm to Dencina, and said a tornado within the hurricane devastated their home and neighborhood.

“She told me the roof started to go piece by piece, and her husband put her and the children in a closet. Then the walls and everything started going so they went outside, grabbed what they could grab and got into the car,” Dencina said. “The wind picked the front of the car up, and at some point it came back down. The next thing they knew they couldn’t drive any farther; the water was coming at them. They had to turn back then. 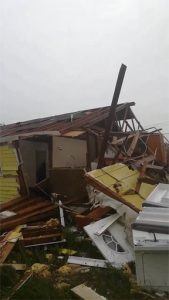 “So many of the houses there are stone, not made of wood. The ocean came in and just crushed them.”

Dencina said there is very little rescue traffic going back and forth into the devastated areas, which means that severely injured people are piled up waiting for help.

“They’re not telling the whole story on the news,” she said. “There are bodies all over the place, and they’re not taking anyone off the island unless their limbs are falling off. No one is getting out.”

Dencina has been in contact with 14 family members, including Ethlyn, her husband and her children. One of them is a baby. Several of her family members are still not accounted for.

“In Murphy Town the water was up to their necks when they were in the house,” Dencina said. “They had to hold the baby up through the storm. Another girl called me, begging to come get her siblings off the island. We hired an 18-seat plane to go and get them, but Marsh Harbor was not open yet as of today (Thursday), and the other two airports at Treasure Key and Sandy Point are still quite far from where Dencina’s family ended up in Marsh Harbor.

“The places between Marsh Harbor and those airports are filled with water and debris,” she said, “and people who would normally share what they had aren’t letting other people use their cell phones, much less use their vehicles to drive people to safety.”

As of press time on Thursday, news stations from the Bahamas were reporting that Marsh Harbor Airport had been somewhat cleaned up, and they were hoping to get at least 300 injured people to medical care.

Another threat comes from the mobs of looters that have formed on the destroyed islands. The looting might very well get worse when supplies are handed out.

“My family has to walk around with knives to protect themselves,” Dencina said. “With no electricity, it’s hard to see who is coming in your house in the middle of the night to rob you. I’m not there, but I’m overwhelmed with the news they’ve been telling me … I have to get them off the island. Their home is destroyed, Murphy Town is destroyed … they have nothing there.”

Dencina hopes to get her family members and anyone else who can fit on the plane to Nassau, where it is safe and relatively untouched by Dorian. There are hundreds of islands in the Bahamas, she said, but only a few have been destroyed.

In the meantime, Dencina is waiting to get word that they have clearance to get in that private plane and head toward her family.

“We’re just waiting,” she said. “Waiting for clearance, waiting to get them out of there.”