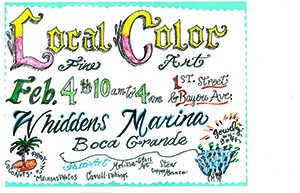 The show motto, “Local Color, Local Art” describes the exhibitors who will be there to show and sell their artwork. The brainchild of Melissa Steyer, daughter of Whidden’s owner Isabel Joiner, the show was started to give local artists a place to exhibit and sell their work on the island during social season.

Hosted by Whidden’s, the show is held under a large tent in the side parking lot of the marina and will include the work of Melissa Steyer, Patti Middleton, Beth Perkins, Stuart Hoeckel, Melissa Perkins and Carroll Swayze. The show was started years ago to showcase the work of wonderful local artists who were not included as exhibiting artists in the Boca Grande Art Alliance. Around the same time “The Blacksheep in Paradise” Gallery was opened by Stuart Hoeckel and Patti Middleton so that local artists would have an outlet for their artwork.

Whidden’s Marina is a wonderful eclectic blend of old and new Boca Grande. Founded by Sam Whidden in 1926, the marina has been run by the Whidden family ever since. One of Boca Grande’s oldest marinas, Whidden’s was also a restaurant and a well known night spot for live music and dancing in the past.

“Whiddens has been a part of the local color of the island and a part of my life as long as I can remember,” said painter Carroll Swayze. “I spent many a night at Whidden’s dance hall listening to live music and dancing on the dock. Some of my fondest memories of the old island times happened at Whidden’s surrounded by friends and family listening to the Smoked Mullet Band and having fun. It always makes me smile when I round that curve and see that beautiful old building with all her history standing tall and proud.”

While many things have changed on the island what hasn’t changed is the old fashioned hospitality and old Florida charm of the marina, her owners and her fishermen on the dock. Added to the National Register of Historic Places in December of 2000, Whidden’s maintains a store, a bait shop, a marina, a fishing center, as well as housing the Gasparilla Maritime Museum where the family works hard to preserve the history of fishing and life as it was on the island.

This years show will include a fundraiser for the Maritime Museum sponsored by local artist, Carroll Swayze. Swayze recently published her Coloring Book and she will be on hand to sign her books at the Local Color Show. Swayze’s Coloring Books will be for sale and she will be donating part of her sales to the Museum this year. As she stated, “I think it’s important for everyone to do their part to preserve the history of our amazing community and I’m happy to donate for this good cause.”

The Whidden’s Marina ‘Local Color’ Art Show is this Saturday, Feb. 4 from 10 a.m. to 4 p.m. on the grounds of Whidden’s Marina at 190 1st Street East. The art show is free and everyone is invited to come out, spend the day, get to know your local artists and hopefully add something beautiful to your art collection.

For more information contact Carroll Swayze at (941) 266-6434 or email Carroll at SwayzeArt@msn.com.

Newer PostCHOWDAH HEAH! GET YA STEAMIN’ HOT CHOWDAH!
Older PostRPP’S ‘Odd Couple’ X 2 is one of the reasons why local theater is the best