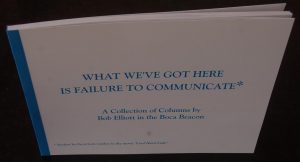 Boca Beacon columnist Bob Elliot has compiled four years of published pieces of his work in a new book, “What We’ve Got Here is a Failure to Communicate,” and it’s available now for purchase through the author.

Several years ago, Elliot started reprinting chapter snippets from his book, “Make Your Point,” in the Gasparilla Gazette. The Boca Beacon purchased the Gazette four years ago, and Elliot was asked to continue submitting pieces for the Beacon at that time.

“Soon I ran out of chapters from the book, and I had to go on to other topics concerning communications, so I wrote about high-tech communications, human behavioral issues and personal issues related to communications – gossip, multitasking, ethical values and other things,” Elliot said.

The author regularly runs into people in local grocery stores who have told him they are fans and that they clip his columns to share with others.

“And I chose to publish the book so the material would be available to share with family and friends,” he said. “I picked what I thought were the best 78 columns and published them under the title, which is a takeoff of a line in ‘Cool Hand Luke’ – one of my favorite movies.”

Elliot is the founder of the Boca Grande Camera Club. He spent his career working on improving communications at large corporations, where he witnessed many of the faux pas detailed in his book, “Make Your Point,” which he co-wrote with Kevin Carroll.

Elliot has copies of his paperback book available now. The price is $15 (to cover the printing cost), and it can be ordered by phone at (941) 698-2986, or you can send him an email at speakcomm@aol.com.