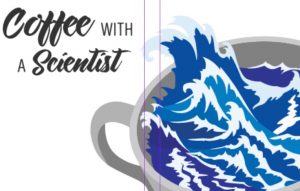 BY OLIVIA CAMERON – On Tuesday, Feb. 18, guests of Dr. Locascio’s interactive presentation got to learn about updated research methods of snook tracking and sampling for knowledge about the red tide effects of the past few years. His presentation, entitled “Tracking spawning snook recovery from red tide: Incorporating a drone as a survey tool,” gave the public a look into what our scientists are seeing.

It was all part of the “Coffee with a Scientist” program.

“This is an unfortunate season of spawning snook colliding with red tide,” said Dr. Locascio. “You can feel it in your throat, but it’s even worse for the animals in the water.”

The red tide-causing organism, brevetoxin, has a perfect home in the warm temperature of Southwest Florida’s waters. “The brevetoxin binds itself to the neuron system that you depend on to do most things,” said Dr. Locascio. This neuron malfunction often causes sea life to die.

The timing of red tide’s occurrence coincidentally falls into place with the spawning of snook, between June and October.

When the snook reproduce during this month, each is born as a male. Their biological composition then transitions over to female through their lifetime along with their size. And with snooks’ reproduction patterns occurring every one to two days, the ratio should even out to half male and half female.

These fish also surprisingly improve their reproductive success with time. Therefore, the success of passing on their genes is cut off.

“The snook cycle happens locally, which is why the local red tide impact is important,” said Dr. Locascio. The snook tend to stay within a certain area over the course of these months. With the use of acoustic tagging, the snook can be detected by a small inserted device, which proves the stagnant behavior of a female snook off Little Gasparilla.

Using net surveys, the team was also able to count and measure the fish found in the area.

With the additional use of experimental drone surveying, Dr. Locascio and drone operator Robert Sawyer went out on the boat to see what kinds of samples they were actually taking.

“When we’re trying to catch them, we’re looking from high up on the boat, so I thought we should experiment with drone research,” Dr. Locascoio said.

With drone footage, the team found how many groups of snook they were missing with their net surveys. Footage would show individual bodies of fish collecting together under murky water, just surpassing the net cast.

Dr. Locascio explained that their team will continue to monitor the snook sex ratio, develop drone surveying and tag female snook to bring more information regarding the effects of red tide on the Island’s species.

With the research collected, the Mote team hopes we can protect the juvenile snook habitat and monitor their environment to rid it of threats. “If we don’t have the juvenile habitat, we won’t have a fishery.”

This event’s third-year sponsor is US Trust Bank of America. For more information, visit mote.org.

Dr. Locascio is the program manager of Mote Marine’s Fisheries Habitat Ecology and Acoustics Program. He earned his Ph.D. in marine science at the University of South Florida before joining the Mote team.