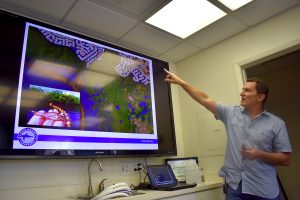 The third “Coffee With a Scientist” event of the season sponsored by Mote Marine Laboratory was held on Wednesday, March 21 at the Boca Grande Mote office.

This week, Dr. Jim Locascio returned to the island to discuss “Fish Communities and Habitat Use Patterns in Phillipi Creek and Associated Stormwater Canals.”

He said Sarasota wants to enhance the Phillipi Creek waterways as habitat because officials understand the large amount of fish living in the canals.

“They recognize the value of this coastal habitat as nursery grounds for the fish that we love to catch – snook, tarpon, redfish and trout,” Locascio said. “These specials require these coastal waterways for important life history stages.

Locascio and his team sampled 14 different locations of canals that join into Phillipi Creek and found the bends in the canal create a more complex habitat, which supports more diversity. There are more trees around, which stabilizes the water.

“The Celery Fields (retention ponds) in Sarasota east of I75 were used for agricultural purposes decades ago,” Locascio said. “Today there is no real habitat complexity in them.”

The typical methods for doing a study like this are to get samples of the fish.

A net is placed in the canals and the fish move into the net, and then they are taken in buckets to be counted and measured and specimens are taken from them.

Samples were taken in both the wet and dry season.

Water quality is also looked into during the studies.

The function of an estuary is to become like a nursery, where baby fish can grow. They need to have a suitable habitat to grow in … they are the future of our fisheries.”

The tidal creeks of Charlotte Harbor are filled with baby bass and baby snook.

“They are sharing these two micro-habitats and it’s interesting to see which one will become a larger population sharing the water,” the scientist said.

If the goal is to restore habitat in the future, the research Locascio has been doing and documenting will be very helpful.

Locascio has visited Boca Grande to speak on a variety of marine science issues over the past several years.

He is the program manager of the fisheries habitat ecology at Mote Marine. His research background is on the use of passive acoustics to measure underwater sound production of fishes associated with courtship and spawning. He uses other acoustic methods in his research including SONAR and acoustic tags and receivers, the latter on a variety of species.

The next “Coffee With a Scientist” free event is scheduled for 9 a.m. on Wednesday, March 28 at 480 East Railroad Avenue on the island.