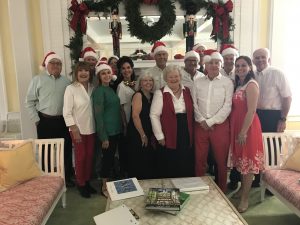 BY OLIVIA CAMERON- On the evening of Wednesday, Nov. 18 Grande Glee’s singing soirée commenced with cocktails in hand and topics on the tips of their tongues regarding a unique holiday event in the works. With a selection of mixed drinks on standby, the Glee members met through Zoom to discuss their upcoming Virtual Christmas Cocktail Concert.

Not only did they review the set list of songs in preparation for their virtual program, but they also shared a few laughs and stories of their improvement.

Ever since Erica Ress Martin started Grande Glee in 2015, she was encouraged by the affirmations of her vocal instructor, Musical Director Sharon Ponte. “Sharon gave me confidence. She got me from a few high soprano notes to many octaves. More than that, she had me humming nonstop,” said Erica.

Martin and Ponte joined forces to direct a free concert, wine included, with twelve singers who decided to take part. “Sharon puts hours into planning the music we work on. She helps choose the songs that work best for each of our voices, still respecting what we want to perform. She does stomp her feet. She does roll her eyes. She does push us. She is loved by all of us,” said Erica.

Six seasons later, the group never imagined they’d be met with the challenge of singing through a virtual platform with vocal delays and software compressor interference. “As long as we can see each other and sing together, we’re all happy,” said Erica.

Grande Glee’s Virtual Christmas Cocktail Concert will showcase handpicked Christmas classics. As a sneak peak, some of the singers discussed their songs and reasons behind choosing them. John Thomas is eager to serenade with “White Christmas.” James Grant will perform the critically acclaimed classic, “Grandma Got Ran Over by a Reindeer.” Erica Ress Martin will debut her rendition of “I’ll Believe in You,” from Broadway’s “Elf.” And of course, Jerry Edgerton is sneaking in a song from “The Grinch.”

James Martin stated his excitement to reach “some wicked-high notes” with a double performance. There may also be a captivating ballad of the “Christmas in the Trenches” to be performed by John Cleghorn.

“This song originated from the 1914 Christmas truce between the British and German lines in the middle of World War I,” said John. “It comes from their heart as they show family pictures across the lines.” The song ends with a line that resonated with John. It reads, “On each end of the rifle we’re the same.”

With a blend of classic and comedic, Grande Glee’s virtual program can be perfectly paired with a refreshing cup of eggnog. “It’s the magic of singing your heart out once a week,” said Erica. “Even during a pandemic.”

Singer Elaine Skypala couldn’t ask for a better crew to make memories with. “We’re able to laugh and take our minds off everything else, because we have to concentrate on one thing – singing together.”

Grande Glee anticipates that the Virtual Christmas Cocktail Concert will be a gift to friends and family on Dec. 20.