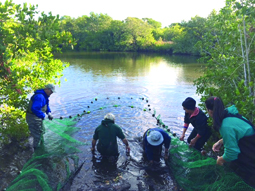 It was the coolest morning in Placida this year at 57 degrees on December 10 as I drove north on Placida Road at 7:15 a.m. and turned right onto Gasparilla Pines Blvd. and again into Lemon Bay Conservancy’s Wildflower Preserve.

Looking eastward over the recently-cleared exotic pepper trees, experienced net pull team volunteer and LBC Member Bo Hamrick and I noticed how beautiful the emerging blue sky was at that moment. The lowest cloud edges were brightly illuminated in amazingly beautiful patterns by the early sunrise’s penetrating morning rays. It was the perfect beginning of a very special Saturday morning for LBC’s fun-loving team of tarpon net pull volunteers.

By 7:40 a.m. LBC’s Wildflower Preserve parking lot quickly filled with more than a dozen vehicles and at least 17 diverse and multi-talented men and women, all volunteers varying in age from 16 to 80.

The first order of business was connecting the jon boat trailer to volunteer local businessman Jim Bennet of Bennett Marine services’ pickup truck. Next, at least eight experienced team members quickly loaded up LBC’s huge 600-foot custom-designed tarpon seine net into the boat, and the testing equipment into Jim’s truck. By 8:20 a.m., after a vigorous 15-minute walk, the LBC net pull team was all assembled at Wildflower’s Tarpon Pond One.

One group began unloading the boat from its trailer into the water. Next they prepared the net to be slowly and silently distributed out into the water along the edges of the plentiful natural mangroves surrounding the shoreline of this tidal pond, a natural habitat for tarpon and snook. The jon boat team of two employs a small electric trolling motor so as minimize the boat and net’s presence in the mud-colored, low-oxygen-content estuarial water.

The net pull on LBC’ biggest open Tidal pond One went smoothly, with many fat mullet captured (many still were quite adept at jumping out from the net). Upon landing the big net, the custom 10-foot-long-by-6-feet-deep retrieval pocket at the shore line contained a few mullet. Fortunately one heathy 12-inch snook was captured, measured and released. At this pond, as in previous visits, no tarpon were retrieved, yet several small clusters were seem heading up into shallower water under thick mangroves where they were safe from the net.

By 9 a.m. the LBC net pull volunteer team had reloaded the jon boat and net and relocated to the nearby and connected, narrower and always productive Wildflower Tidal Tarpon Pond 2, near several Fiddlers Green II condos. Again Mia, Jamie and Rebecca went down the shoreline to perform the scientific water quality while the LBC volunteer net pull boat team readied the boat in the water, and prepared the 600-foot-long tarpon seine net for the second long pond pull.

Our early Christmas surprise was that the volunteer LBC pull team’s smooth coordination produced a record monthly net pull for 2016 of 138 juvenile tarpon. There were so many tarpon in the net it required two adults, Jamie Darrow of the FWC and Mia Conlon. The team was careful to keep the tarpon in the water until measurement documentation by the FWC’s Chuck Idelbeger, a retired volunteer, was accomplished.

The 138 juvenile tarpon fish captured, measured, and safely released ranged from about five inches long to 9.5 inches long. Jamie Darrow surmised they were most likely a product of the annual spring/summer off-shore birthing called spawning, which occurs about 100 miles offshore from the Boca Grande Pass.

Lemon Bay Conservancy is actively engaged in the protection and enhancement of these natural tidal backwater mangrove creek nursery areas, as they are rapidly diminishing due to development. LBC has taken a leadership role working with public and private partners in an effort to sustain and increase the population of two regional vitally important sport fish tarpon and snook

STEM students and those interested in helping to protect our important tarpon & snook sport fish to visit and observe and even help pull the net at Wildflower Preserve in January, February or March. Just call LBS’s office at (941) 830-8922.

Our next monthly tarpon & snook net pull will be held on Saturday, Jan. 14 at Wildflower Preserve beginning at 7:45 a.m.

More information on LBC’s exciting major wetlands and fish habitat expansion project at Wildflower Preserve – where we increase the tarpon habitat by three times and increase the freshwater habitat by two times – plus a schedule of our many free nature tours and amazing plant and wildlife nature enhancing projects, can be found at lemonbayconsercancy.com.

We invite the public to come out and to get involved and have fun learning more Lemon Bay Conservancy and its proactive role sustaining and protecting our key coastal lands and wildlife.

Jim Cooper is the President of Lemon Bay Conservancy