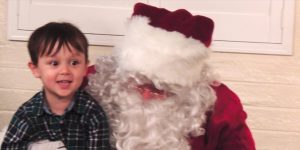 ■ For many, many years Santa has taken a moment on Christmas Eve to stop by the Crowninshield Community House to see the children of the island before he begins his work around the world, and this year was no different. Nana Kay Steyer took up her annual role as reader of “Twas the Night Before Christmas,” and Santa gave out a few gifts, many hugs and even a few kisses before departing.