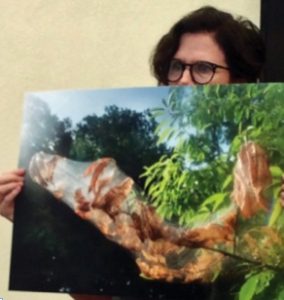 At the last meeting of the Boca Grande Camera Club, island resident and club member Patti Christakos, a professional photographer and a candidate for a Master of Fine Arts (MFA) at Maine Media College in Rockport, Maine, gave a presentation on “Telling Stories with Light,” sharing 16 x 20 versions of photographs that “followed the light …” … even though they were done for a professor who wanted photos that did not tell a story!

Her professor wanted the students to immerse themselves in the art of the photograph in a way that would lead to “self-discovery.”

Patti told us how hard it was for her to do photography that did not tell a story, since she approaches photography from a “creative three-legged stool,” an analogy that was inspired by Minneapolis photographer/educator Alex Soth’s three paths – the art world, writing and publishing – which appeared in the book “The Artist as Culture Producer,” edited by Sharon Louden.

Patti’s three paths are art, writing and education, which she is applying to her work with Chris Thompson at The Island School Camera Club. She began her journey in journalism in the 1980s but switched to studio art with her camera, and she has become one of the best-known local photographers with a reputation, as she puts it, “for the quirky.”

She has drawn inspiration for her work from Teju Cole’s Blind Spot (photography and a travelogue), which is up for the best photo journalism award for the year, and his Open City (fiction), as well as Julia Cameron’s “The Artist’s Way.” She is especially enamored of one of the tools in Julia’s toolbox called “Morning Papers,” in which you are encouraged to write three longhand pages every day about anything going on in your life.

In “following the light” Patti said that you should make your pictures about everyday scenes and sights, to always print your pictures, to stay curious and feed your creative wells through nature, poetry and art. She said you can only make someone else’s day if you share your work, which is best shared in print. She gave numerous tips on the type of paper to print on, where to purchase it and how to get it printed, and she told the group to always have a camera in sight and ready to use, as you never know when a subject will just appear.

The photos she shared included one of a bird that had crashed into a bathroom window, with its crash shown above a reflection of her hand showing the use of mirrors in light. There was another of her daughter’s room with a print of the “Light of the World” Christ child with light reflected from a mirror and windows in another room, and one of an ironing board with light coming through the window. There was a photo of her office and the light in an adjacent room; a blown-up photo of an insect cocoon showing light through and around it; and a blurred photo of a yellow bird that crashed into another window, showing how light can be reflected to show movement in a photo.

Patti says she only uses prime lenses, so in order to get a close-up she has to move her feet, not a lens! She prefers the 24, 50, and 110 lenses for her Nikon camera.

A published author, her current body of work, called “The Mind-Made Particulars (of Home),” incorporates the sense of home as articulated by Robert Creeley in his poem, “This House.” Another source of inspiration is “Home: A Collection of Poetry & Art,” edited by Stan Tymorek, which includes poetry, photography and artwork about our domestic interiors.

Other current areas of curiosity that Patti is exploring are alternative processes, especially anthotypes (cameraless flower prints) and the work of Victorian photographer Lady Clementina Hawarden, a pioneering British photographer of the mid-1800s.

The next meeting of the Camera Cub will be on Tuesday, Dec. 12, when member Skip Perry will lead a field trip to explore the Range Light and its renovation, which members of the Camera Club actively documented during the past year.

Membership is open to anyone who is interested in photography; dues are $35. There are two meetings each month as well as other special events like the “Photography as Art Show” In March.

Contact Annie Vorel at annievorel@gmail.com for information on how to join.The Club also has a Facebook page.