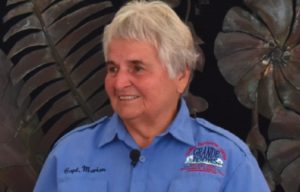 The audience laughed, and some cried, when Capt. Marian Schneider shared memories of growing up on the island, her pioneering efforts of ecotourism and the closing of her business “Grande Tours” when she spoke at the library on Wednesday, Feb. 27.

Schneider gave a presentation as part of the Boca Grande Historical Society’s annual “History Bytes” events that are held year beginning in February at the Johann Fust Community Library.

Schneider spoke about fishing from the dock at Sam Whidden’s Marina, using a cane pole and pork and beans.

“I would go down to the dock barefoot and fish, and he had a pet monkey named Chico, who’d sit next to me on the dock and steal the pork and beans,” Schneider said. “He was my very best friend on the island.”

She recalled that the kids had to make their own entertainment, because there wasn’t much to do.

“The big houses on the beach would close up in the summer, so we’d swim in all the swimming pools.”

She had a boat when she was seven year old, before she had a bicycle, because it was a necessity.

She remembers running the boat up and down the bayou and out to the phosphate docks to look at the big ships picking up the phosphate. She had a fond admiration of the environment at a very young age.

Schneider discussed her recently published book, “There’s a Captain In You.” On the cover of the book is a photo of her when she was 12 years old with her first tarpon caught in Boca Grande Pass.

“It was over 125 pounds, and I weighed less than that, so reeling it in was quite a struggle. But what made it so special was that I was with my daddy.”

Her father came here in the early 1940s and began fishing with the locals.

“He taught me so much of what I put in the book,” she said. “I hope it’s an inspiration for people. This book is how I remember Boca Grande – this is my story.”

Schneider started Grande Tours when she was 47 years old. She had earned a degree in medical technology from the University of Miami that opened many doors for her, like travelling to Africa, where she volunteered to work in a hospital.

But when she turned 47 she was burned out, and she walked out of her career, purchased one boat and rented a little cottage from Eunice Albritton (whom she’d known all her life) and started Grande Tours in 1987.

She started giving tours to visitors and educating them about the history of the area. This was long before the term “ecotourism” became known. Most of her customers were referred by existing customers who would book a tour each year they visited the area. They were so fascinated by the knowledge they gained that they shared their experiences, and Capt. Marian grew quite popular. The business became so busy that she purchased a second boat and hired a captain. And it just grew from there.

“My daddy instilled in me a love for this island,” she said. “He said if you teach people to love something, then they’ll take care of it. It’s that simple.”

And that’s what Grande Tours did. Over the years, she required any captains or guides she hired to become Florida Master Naturalists.

“I didn’t want to just give boat rides, I wanted to teach people about the environment.”

One thing she tried to do with the business was to offer something new every year. She offered summer camps for kids and dolphin sight and sound tours, which recorded dolphins communicating via underwater listening devices called hydrophones. That attracted reporters and photographers from all across the nation.

In 1992 she offered the first guided kayak tours in Charlotte County.

Schneider has been recognized as a pioneer of ecotourism and a publicly acclaimed steward of Charlotte Harbor.

In sharing her life stories, her passion for the environment was obvious, but her desire to share it and her urgency to preserve it for future generations was infectious. Schneider fielded many questions from the audience on Wednesday, including one asking if she would ever re-open the business.

To which she replied, “No. That chapter is over, and I am at peace with it.”

A book signing followed the program.

At the end of the presentation, Capt. Marian took a moment with Betsy Joiner to talk about the recently departed Eunice Albritton.

“The castle (referring to the Fishery  cottage) is gone now and so is the queen,” Schneider said. “But when I went to visit her a few weeks ago, she talked about how wonderful it was to see the sun rise and set for so many years, and how blessed she was to spend so much of her life in a place she loved.”

Schneider will be doing a book signing at the Boca Grande Historical Society on Saturday, March 2 from 10 a.m.to 1 p.m. The History Center is located at 170 Park Avenue in Boca Grande.

The History Bytes programs are free and open to all and are sponsored by U.S. Trust.

The next one is scheduled for Wednesday, March 6 at 11 a.m. at the library. It will feature guest speakers Star Ford Whitney and Mills Ford, brother and sister who first came to Boca Grande in 1960 for spring vacation with their mother, Eleanor Ames and her husband John S. Ames Jr.