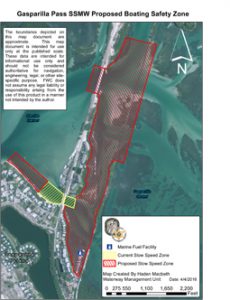 Charlotte County has determined that the “slow speed/no wake” zone in the area of Gasparilla Sound and the Intracoastal Waterway will soon be expanded to include the area of the railroad trestle sandbar, a very popular place for boaters to hang out.

The amendment to Article II, Chapter 3-1 and Section 327.46(1)(c) of the code of laws and ordinances of Charlotte County, states that Florida Statute 327.46 (1)(b) authorizes the County to establish the slow speed/minimum wake zone without additional agency approval within 300 feet of any bridge span presenting a vertical clearance of less than 25 feet, or a horizontal clearance of less than 100 feet, which includes not only the Boca Grande Causeway bridges but the railroad trestle as well.

“Slow speed” is defined as a vessel that is fully off plane and completely settled in the water, and “no wake” means the vessel must proceed “at a speed which is reasonable and prudent under the prevailing circumstances, so as to avoid the creation of an excessive wake or other hazardous condition which endangers or is likely to endanger other vessels or other persons using the waterway.”

Charlotte County sent their request to expand the slow speed/no wake zone to the Florida Fish and Wildlife Conservation Commission in March. The FWC put out a request for input on the proposal with a deadline of April 26, and eventually determined they would approve it. Charlotte County commissioners voted to incorporate the amendment within the last few days, but signs are not up yet.

The estimated cost to Charlotte County is $8,000 for eight new pilings and 16 new signs, and the money will come from “boater improvement” state funding. The signs will be posted at the entrances into the area along the Boca Grande Causeway.