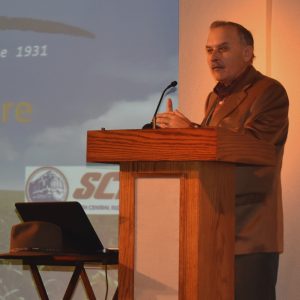 Buker provided an inside look at the sugar and citrus industries, focusing on Florida’s oldest and largest sugarcane farming and processing operations and forecasts for the future.

Buker said the company strives to stay away from the use of harmful pesticides, but he said different bugs eat corn, and others eat cane, so some pesticides still must be used. He also said that a variety of wildlife thrives on the farms where corn and sugar are harvested.

He went on to discuss some of the challenges that come along with operations.

“Citrus greening is killing many of our trees, and nothing will stop it,” Buker said.

Citrus greening disease is caused by a vector-transmitted pathogen. The causative agents are motile bacteria.

A Q&A session followed the presentation.

Audience members were asked to write their questions down on notecards, and Friends of Boca Grande Community Center Executive Director Marta Howell read them to Buker.

The first question was in relation to polluting toxins in local waters, and if U.S. Sugar executives are doing anything about it.

“Our water is tested constantly – I’ve made demonstrations – I’ve drunk it from a canal,” Buker said. “What you’re talking about is fertilizer, but we don’t send water that goes to any aquifer, it’s local and we’ve reduced our fertilizer runoff by 56 percent, and it’s now hitting most of the Everglades cleaner than rain.”

The next question was:

“What can be done to avoid the issue of sending water into the Caloosahatchee when there is excessive rainfall?”

Buker replied, “In 2006 the U.S. Army Corps of Engineers lowered the lake level because the levy around the lake is old and needs repairs, so the best thing they can do is finish those repairs and get the lake level back up to where is used to be.”

Another guest asked, “Why doesn’t U.S. Sugar honor an agreement to sell 187,000 acres of agricultural land to the state of Florida, so that Lake Okeechobee overflows can be channeled and sent south to the Everglades to aide in restoration? The agricultural run-off from ‘Lake O’ causes massive algae blooms, which kill fish and cost jobs.”

Buker replied that the verbiage stated in the question is not true.

“The government signed a contract in 2007 to buy land owned by U.S. Sugar,” he said. “In 2008, the government ran out of money and decided not to honor the contract. We never backed out of the agreement.”

Several members of the audience grumbled, and banter began among a few guests.

Howell reminded the audience that the format for the presentation was question-and-answer, and proceeded to continue with more inquiries from the audience.

Newer PostWhat will happen if the ‘what if’ happens?
Older PostPerry Johnson to present program to Camera Club regarding digital imaging