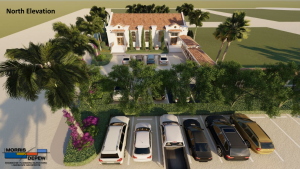 BY MARCY SHORTUSE- The expansion project at Our Lady of Mercy Catholic Church is moving along, and a public meeting was held online on Thursday, June 18, regarding an application to allow the expansion and for several special exceptions.

The requested variances are for a plot of land, approximately 0.22-acres, located between West Railroad Avenue and the small alley that is located there. The property consists of an existing single residence, which is proposed for demolition to allow construction of a new parish hall.

The proposed parish hall is designed to be incorporated into the existing Our Lady of Mercy style of architecture and, according to the architectural firm of Morris Depew, flow seamlessly.

Variances requested by the project managers include 1) relief from the requirement of a minimum 15-foot buffer along the property line abutting a right-of-way, and to instead allow a buffer of varying widths along Railroad Avenue and the alley; 2) relief from the minimum requirement of a 15-foot buffer along the south property line abutting a single-family residence with a wall or berm; and 3) relief from a requirement that limits the maximum amount of palm trees to 50 percent of the required trees, to allow the installation of only palm trees. The amount of landscaping required by code, they said, would be provided within the reduced buffers.

In the special exception request narrative, it states that “Boca Grande is described in the Vision Statement of the Lee Plan as having less than 15 percent land vacancy. The logical expansion of the church’s facilities represents the growing need for this service in a community with limited available lands. Among the predominant land uses listed in the Urban Community category per Policy 1.1.4 are public and quasi-public uses, further indicating the uses’ suitability at the proposed location. It should be noted, per Policy 2.1.3, that churches, among other public and quasi-public uses listed, are permitted in all land use categories.”

According to representatives of Morris Depew, the exceptional conditions of the property that necessitate the variance requests are historical. The plat was approved in 1925, prior to adoption of the zoning regulations. The subject property 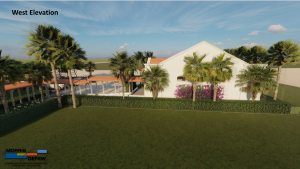 consists of two lots of the revised plat of Boca Grande. It is bounded on the east by W. Railroad Avenue and on the west by a midblock alley. This creates two lot frontages. The lot depth is reduced as a result of the angle at which West Railroad Avenue intersects the lot, creating a trapezoid shape and reducing the building area. When the code minimum setbacks are applied, the building area is reduced to 45 feet by 60 feet. Most nonresidential buildings have an average depth in excess of 60 feet. The historical conditions created by the plat and application of code minimum property development regulations create a physical hardship to developing the property.

There was no contention by the public regarding the exceptions because, as Morris Depew representatives reported, no one attended the online meeting.

The existing structure at 221 W. Railroad Ave., which has been owned by the church since 2018, will be demolished. In its place will be expanded parking for the church, and the new proposed parish hall. The new hall will be 3,647 square feet. A covered walkway will be constructed that goes from the side door of the church to the new hall.

According to Father Carosella, during high season the church is filled, sometimes five times a day and sometimes with standing room only. In addition to the schedule of five masses, he said, very often parishioners congregate on the steps outside the church or are seated in the courtyard. The new building, which he called The Parish Life Center, will most likely help parking issues that might come up from multiple masses, as it will reduce the amount of services through the potential to simulcast the service from the church into the parish hall.

“We have found a plan for a building that will not compete with the church, but rather complement it,” he said.

The church plan was approved by the Boca Grande Historic Preservation Board earlier this month.