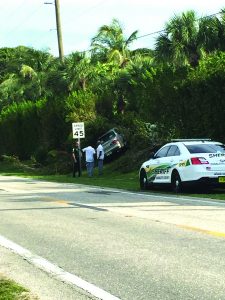 ■ STAFF REPORT – The sheriff’s office activity log for the island has been a little busier lately, with a vehicle accident, an assault and a theft reported recently.

On Friday, May 13 at approximately 5 p.m. the vehicle shown here was southbound on Gasparilla Road at the north end of the island when the vehicle left the roadway and met with some trees. The driver was not injured in that accident, and no other vehicles were involved.

On Saturday, May 21 an island deputy met with a complainant at The Gasparilla Inn & Club who said she had been using a Gasparilla Inn & Club golf cart the previous day when a bag containing a pair of Roberto Coin earrings valued at $6,000, as well as other miscellaneous items, was taken from the cart. A silver custom-made necklace with diamonds, estimated at $4,000, was also missing from the bag.

On Sunday, May 22 island deputies went to Englewood Hospital to speak with the victim of a battery that occurred near the intersection of 4th Street and Palm Avenue.

According to reports, the victim stated he was attending a wedding on the island when he observed an unknown female being assaulted at that location, and he stepped into the situation to assist her. The victim told deputies at that time that the male who was assaulting the femaile, as well as another male, attacked him. The victim claimed the two men hit him in the face with bare fists, and a cut on his lower lip needed one stitch. No one is being sought in regard to this incident, as the victim decided to withdraw his complaint.