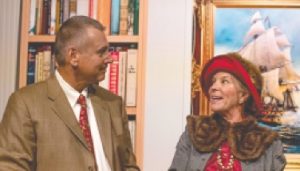 A one-act, one-hour Noel Coward play, buffet dinner by the Pass Club’s Michael Klocinski, some of our favorite local actors and actresses and an open bar. That’s what the Royal Palm Players are serving up for a special evening this holiday season.

With most performances already sold out, tickets are still available for “Hands Across the Sea” on Tuesday and Wednesday, Dec. 17 and 18. For the first time, the Players’ play will be staged in a dinner theater format at the Boca Bay Pass Club’s Power House.