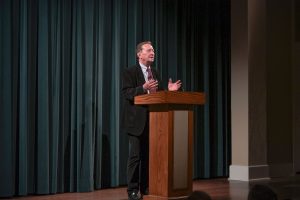 Walker, a 28-year correspondent for The Guardian and UPI bureau chief emeritus, has written many books on global issues, as well as a 9-book detective series featuring “Bruno,” a French policemen who is a tennis player, wounded military veteran, fine cook, hunter, and a rugby coach. The Bruno books appear on bookshelves throughout Boca Grande.

Neither the UK Brexit vote nor Donald Trump’s election should come as a shock, according to Walker. He sees each “as a victory for the activists over the cosmopolitans and born of disconnect with the status quo.” The common current underlying these events is escalating change – a revolution in communication technology, medicine, sexual relationships, robotic accomplishments, 3D printing, as well as fluctuating national alliances, burgeoning fears of terrorism, financial restructuring and dramatic growth of the over-60 population, while the under-50 demographic group shrivels.

Brightening the picture for Americans, Walker reminded us of our potential energy independence and natural resources. He sees educational reform as “the key to the road ahead” and insists that education must be a lifelong process.

University education is “outdated in ten years and well before college loans are paid off. Four-year national service should be a requirement, a period in which the young adult learns a skill, how to take orders and give orders, and is exposed to people from different regions and backgrounds” before returning to the college classroom.

Education, then, must continue through life, keeping people informed, useful and involved through old age.  In this connection, he remarked from the auditorium stage that the Community Center program itself “is a becon of hope, a center for lifelong learning, public discourse, interaction and discussion.”

In closing, Walker offered a comforting thought about our descendants’ looming road, paraphrasing Winston Churchill: “You can always count on Americans to do the right thing – after they’ve exhausted every possible alternative!”

Note: Because of popular demand, Martin Walker has been engaged for a return talk with the Friends of Boca Grande at the Boca Grande Community Center in 2018.