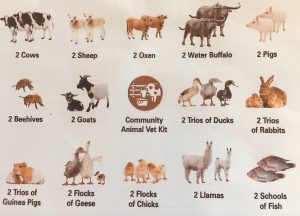 Boca Grande resident Libby Frazier is spearheading a campaign to “Build an Ark” to help a community of people who are lacking the basic necessities to sustain healthy lives.

For the past few years, she had been receiving pamphlets in the mail from Heifer International, an organization that brings help and hope to millions of impoverished families worldwide.

“When I saw the ark in the catalogue, I thought it would make for a nice project for our island to get together and donate to this worthy cause,” Frazier said. “And I really like that fact that this is a gift that keeps on giving.”

Since 1944, the organization has worked to provide livestock and agriculture by developing programs that alleviate hunger and poverty.

Heifer gifts for the holidays are so much more than just one single contribution.

The “Be an Ark Angel” fundraiser project offers a poor and hungry community the opportunity to have a sustainable food source, and pass on the gift by sharing the animal’s offspring to other families.

The gift of livestock can eventually provide enough for an entire community, and even further, the animals can be shared to help neighboring communities.

Just one llama can produce enough wool to make blankets, ponchos, carpet and rope. And its milk is lower in fat and salt than cow or goat milk. Imagine what an entire ark of animals could do to end hunger and poverty.

Dan West, a farmer from the Midwest whose mission was to provide relief utilizing the “teach a man to fish” philosophy, founded Heifer International. And now, 70 years later, the mission to end world hunger is still a continuous battle.

The Ark costs $5,000, which is why Frazier chose to lead the fundraiser and share the information with friends who were also interested in making a donation.

So far, more than $1,500 dollars toward the cause has been raised.

And now Frazier is asking the Boca Grande community if they’d like to help build the ark by making a contribution toward the cause.

“This organization encompasses the whole world,” Frazier said. “And since it is the holiday season, I thought it was the perfect time to get involved in this and help a community of people who desperately need assistance.”

You may also donate online at: heifer.org/gift-catalog/give-where-needed-most-donation.html

There is a sliding scale for the donation amount. Under “What Motivated Your Gift Today” please note Boca Grande Ark.