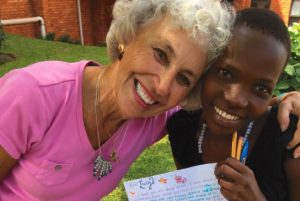 I am frequently asked about the process of recruiting and training women beaders who learn the craft of rolling recycled paper into the rather intricate patterns of the various jewelry items.

It starts with a few staff members, some of whom are from the slums that they visit and were beaders themselves who worked dilligently to be hired. What a great role model they are to their “sisters,” as they have experienced poverty themselves. A slum is chosen, and posters are tacked up announcing a meeting at a central location, day and time. Perhaps 100 will come. A week later another poster is distributed for another meeting. Perhaps 50 will show up of the original group with some add-ons.

As the model is explained, the women who can accept the time and effort required are the ones with the “spark”  needed to sustain themselves through the process to see an opportunity to feed their children consistently and send them to school.  Basically that is their sole objective.

Beading is a 24-month process.  The groups that we “hire” are taught by former beaders how to make one product. They get proficient quickly this way, and we have good quality control. Monies earned go into a bank account that only they can access.  One-third is for living expenses, and the other two-thirds are for emergencies and a nest egg for a future business. Every two weeks the women come to our office to sell their jewelry to us. Once their pieces are accepted, they are paid immediately. If they are not acceptable, we retrain them. These women come to our office either on foot or via a form of public transportation often miles away, and usually with children in tow.

At the end of 18 months of beading, a business plan is presented to the staff to indicate what business they will start up upon graduation. It might be a small chicken farm, or a vegetable stand, or a hair-braiding salon.  We help them to implement this with their monies saved. The wheel continually turns, with our graduates starting up their own means of sustainability and our new beaders coming in.

As I mentioned, these women arrive with their children, many of whom are babies or young ones who have not yet started primary school. I have witnessed the sales of the jewelry, and I often wonder if the child I am holding is going to see another kind of life than her mother had as a child.

Children in Uganda, if they don’t get the opportunity to continue to secondary school and pursue further studies, are probably going to continue the life cycle of poverty they already know only too well.

So, before I tell the story of Lucy Oyella, it is important to familiarize yourself with the Ugandan educational system.

The Ugandan government since 1997 recognizes education as a basic human right and now provides free primary education at age six for seven years. At that time, there was a huge influx of pupils (3.5 million to 7 million). The demand for learning materials, teachers and infrastructure became a challenge to the system, resulting in poor-quality education, low pupil achievement, untrained teachers and overcrowded classroom settings. Many teachers are often absent from classrooms, as they are underpaid and need to have more than one job, which of course contributes to low attendance rates and dropouts.

Secondary school consisting of six years is also free as of 2007. It is divided into the Lower Level, which consists of four years, after which students must pass the Ordinary Level exams, our equivalent of 10th grade. If they pass, they will have two more years of school, at the end of which they must pass the Advanced Level exams (the scary A-levels in at least three subjects). It means that even though about 90 percent of children attend primary school, only 25 percent might enter secondary school but will not finish because of the cost, family pressure to help at home and, for females, marriage or pregnancy, and not necessarily in that order.

With incredible odds to a road of success in government schools, Ugandan children need a way out.

A private school, often religiously based, is the solution, and even those vary in quality. Each school’s yearly tuition costs from $650 to $850; therefore, it is rare that a family existing on less than $1 to $2 a day can afford to send even one child to further their education. The student is required to bring her own mattress, blankets, sheets, pillow, towels, clothing, school supplies, textbooks, exam fees and personal items, including sanitary supplies. It is common to see young children on the back of a “boda boda” (motorcycle) with all of these things as they go off to boarding schools. Boarding schools provide safety, meals three times a day and plenty of time to study without distraction.

Which brings us to Lucy Oyella’s journey …

Lucy was born in 1993 to Geoffrey Oyo and Ester Acen in rural Kilgum, Northern Uganda, a region that for a long time suffered the wrath of civil war under the Lord’s Resistance Army. She is the second of six children, four girls and two boys,  One brother died before the age of five.

Rebels constantly attacked the villages in and around Kilgum. As a result, for months Lucy and her parents trekked to town to find a safe place to spend the night, as most pillaging took place nightly. One evening Lucy’s parents decided that the children should go to the town alone while they stayed to guard the home. On that fateful night, in 2003, the rebels attacked Lucy’s village, and her parents were brutally murdered. Lucy was 10.

Orphaned, frightened, with three younger siblings, she fortunately was taken in by her father’s younger brother, Uncle Walter Obol in Namuwango, one of the largest slums in Kampala. Her uncle and his wife were childless, and Lucy and her siblings were welcomed kindly. Her uncle was a low-level security guard, his wife a small-business owner who had graduated from the Bead for Life beading program. In 2006 Bead For Life assumed sponsorship of Lucy to complete her primary education and later secondary school in a private school.

When Lucy was in year three of secondary school in 2013, Dick and I assumed her sponsorship. She was 20 years old. She has been an outstanding student and passed her A-levels to graduate as one of the top students. She was accepted into The Mengo School of Nursing and Midwifery in Kampala, an outstanding institution with experienced instructors and lecturers who care about their students.

Lucy and I met one another on my last trip to Uganda at her school. I brought her a pair of Swedish clogs, a stethoscope and a heart pressure monitor, all of which she requested!

She has completed two years of her schooling and is now required to have field experience. She is in the process of opening a pharmaceutical dispensary. In 2020, with the help of a computer we provided, she will return to school for two more years and receive her Comprehensive Nursing Degree. Lucy’s journey from ophan to a confident, educated woman will be her entrance into a life for which she has worked hard. Her dream is to own a clinic to help people in her own community.

Lucy’s siblings continue to live with her uncle. Her beloved aunt was killed two years ago in a traffic accident.  Her sisters never completed primary school. Two sisters are married with children. One dropped out of school after failing to get good enough grades to continue. Her brother is currently a student in government secondary school.

Next week: Looking toward the future for Bead for Life: The Street Business School.